The pandemic hit and the federal government stepped in to create a floor for the markets.

Part of this is being done by taking actual stakes in public companies.

The feds later broadened the reach due to the fact that some of the original companies targeted turned it down in the end.

If you need it, you need it… but I wouldn’t want the government owning a big chunk of my company either, this isn’t China.

So now they have all this money for defense companies but nowhere to put it… and in comes YRC Worldwide Inc. which ran into major financial problems when the shutdowns began.

Well that’s not the whole truth. They were actually struggling already which makes the deal I’m about to share with you a bit controversial.

YRC Worldwide Inc. has been beat up but as luck would have it Boening said no thanks to the federal CARES Act loans, creating an opportunity for YRC.

The details were announced July 1st, YRC will be getting $700 million from the U.S. Department of the Treasury to help rebuild. But it comes at a cost… the government is taking a nearly 30% stake in the shipper.

So what does YRC get for giving up so much ownership?

The company said the $700 million it was receiving from the federal government would be cut into two loan tranches, the maturity date on both is Sept. 30, 2024, to be settled with a balloon payment. This gives them a 4 year window to work without needing to make major repayments.

And of course it comes with some other basic requirements as the money is part of the CARES Act.

Liquidity, employee retainment, and executive compensation are of the areas that will be watched.

And this is where the news ends and the speculation begins.

YRC is a little known shipper that has been struggling for years. The company’s market capitalization before the government funding announcement was around 1/10th of the “bailout” money.

So how can the government justify giving $700 million or 10x the value of a company that was struggling before the pandemic? It’s supposed to be more of a bridge loan to help them weather the storm.

But with YRC, the storm does not represent all of their problems. This loan has the likelihood of being one of the more questioned “investments” by the government during the pandemic.

That doesn’t change the fact that this is a catalyst that will move the stock.

Let’s look at why it’s now on my watchlist for the week.

Below is a chart of YRCW going into the announcement.

The stock was clearly trending down before the Covid crisis.

It then began to consolidate with lows in the 1.30s to 1.40s. Taking a shot at a breakout in early June, the stock got smacked down from the 200 day ma.

After which it held support above 1.40 and YRCW started moving up, and traded at the upper range of the consolidation at 1.85 when the news came out on July 1st. 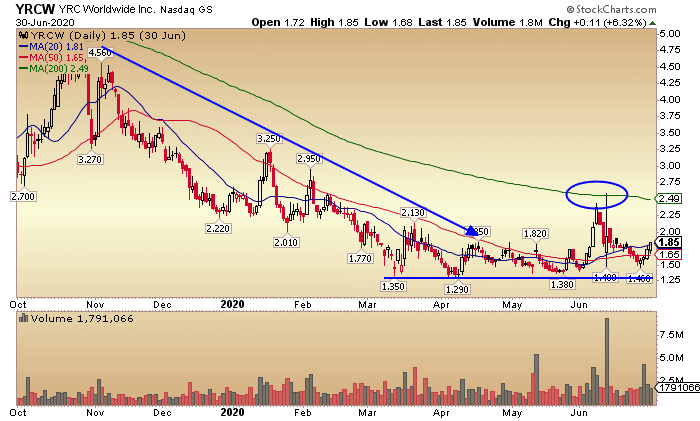 Now take a look at the next chart below…

On July 1st, the announcement day, the stock shot up over 90% to highs, and closed around 75% higher that day.

After which YRCW made its way back to the 200 day on a 50% Fibonacci retracement and held support there.

With another explosive move up to the hit the highs around 3.55 on Friday, YRCW jumped onto my watchlist for the week. 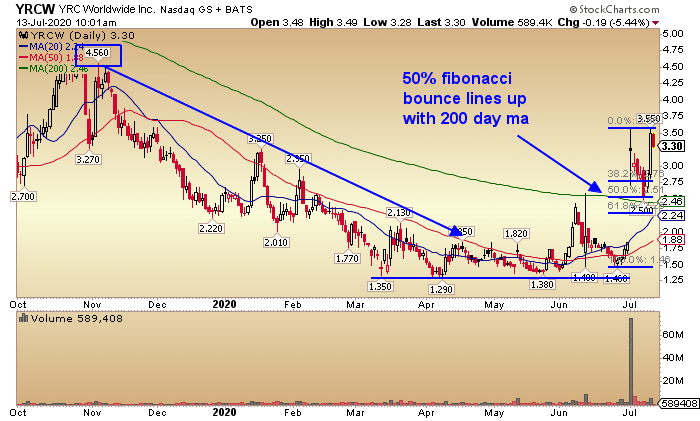 As you can see the stock is failing to break out today, so there is no trade yet.

But with the big $700 million loan, this is one to keep an eye on. While the long term prospects of the company may be suspect, the stock will definitely be in play.

Watch for it to stay above the 200 day on any pullbacks and when it breaks above the highs, I’m looking for a potential move towards the 4.50 range.

Whether I take a position in YRCW has yet to be determined as I am waiting to see a proper setup whether that’s on a breakout or pullback.

But now that I have it on my watchlist, I’ll be ready when it does.

This is just one of the stocks on my watchlist for today. I actually work up a list every single night and send out a video breakdown to my members so they are always ready for the day ahead.

It also serves as a great learning tool as I’m able to walk them through what I am looking for before it happens.

What I see now, why I’m watching it, and what I need to see to get me in.

To get started trading, you don’t just need a strategy that works…

You also need the education to use that strategy.

And that’s what my Profit Prism trading service all about.