How EV Will Disrupt This Useless $437 Billion Industry

On a Sunday, I’d usually watch the Dallas Cowboys play questionable defense, the game has been moved to Tuesday against the Ravens.

So, I didn’t watch any pregame NFL shows or check out sports networks for insight.

But I did have the news this morning.

I don’t understand how these people get jobs on morning shows to talk about politics. What a wonderful world to get paid to say nothing. Or to just blame someone else for the world’s problems.

Of course, they’re hyper-focused on who is at fault for the virus, what might go wrong with the vaccine, who is holding up stimulus spending, and why someone else is wrong… and they’re right. It’s a waste of time.

Want to know an actual important story tonight? One that can help put you in a position to make money?

How about a story like the radical shift in college education spending (valued at $660 billion per year) that I uncovered last month.

Well, this time I’ve just found another $437 billion industry that faces its own reckoning.

This is big, and I want to show you how to invest in the future of this industry.

As you know, I’ve been a big supporter of electric vehicles since the onset of the trend. Forget the politics behind the story. More Americans are starting to show positive sentiment toward these vehicles. They’re cool. They’re sleek.

And they’re coming close to parity in terms of miles they can travel and costs linked to gas-powered engines.

Government mandates worldwide are pushing for fewer emissions, and fiscal policy continues to push widespread adoption of these new engines. That has set off an arms race among automotive giants across the world. I’ve already explained that there remains a massive level of stupidity in the market regarding EVs and future expectations.

For example, Tesla is trading north of 33 times book value. Sure, it will be the largest producer of EV through 2023, the year Volkswagen believes it takes pole position.

Porsche, which owns 53% of Volkswagen, remains undervalued. It’s almost as if the market doesn’t know that Porsche will soon have that must leverage in the market. It trades at 0.5 times book value. You could effectively liquidate the company and double your money tomorrow.

But let’s get to the real story that has my mouth watering about the potential of increased disruption in the automotive industry and the opportunity to make money.

This week, 150 Cadillac dealers announced to stop selling the company’s brand. That represented 17% of the auto company’s total salesforce. The reason for the departure is simple: They don’t want to spend on the necessary upgrades at the locations to sell EVs. Most of the retailers are skeptical about selling battery-powered cars, despite the unstoppable trend.

They would reportedly require a $200,000 upgrade at each location. Instead, the dealers have accepted buyout offers ranging from $300,000 to $1 million.

But let’s ask another question in the age of COVID-19?

Why in the hell are auto dealerships even necessary anymore?

And Tesla itself has engaged in a very public battle over its desire to sell directly to consumers. It turns out, Americans are forced to buy from dealers for a very stupid reason.

The dealership sales model evolved out of a plan by Detroit manufacturers to increase sales and profits. Since manufacturers wanted profits, they farmed out all of the marketing, inventory storage, selling, and more to the dealers. This lets them focus on saving every dollar possible for production while leaving the selling to dealers.

That’s a pretty smart move – back in the 1920s. The automakers sell vehicles in bulk to the privately-owned franchise dealers, who then sell at negotiated prices with each buyer.

But does it matter today in the era of digital innovation?

The argument goes that purchasing a car is a time-consuming affair similar to buying a house. There are taxes, financing, state registrations, and comparison shopping that made dealerships important for decades across the nation. Value-ad was a very simple argument.

But most Americans don’t even want it anymore. A recent study by Advanced Auto Parts said that 75% of American auto buyers would rather just buy their car directly and had how long they have to spend at the dealership. AutoTrader did a similar study. It found that only 17 people out of more than 4,000 liked the current sales model.

These 17 people probably need a hobby.

“Call the bank. I called them four months ago when we first got the lead.

I dug a little deeper and found that politics have been locked into this existing system for decades.

Back in the 1920s and 1930s, dealers locked into their profits and donated some money to local little league teams and bar softball teams. Then they donated more money to the politicians who liked the auto dealers. In turn, politicians created laws that protected the auto franchise model and made it more difficult to innovate in the space.

But then the internet came along. Today you can buy new, small aircraft directly online.

However, new automobiles are complicated to purchase outside of the dealer model.

Today, every state has some dealership-friendly regulations – including laws that give certain dealerships exclusive sales territory and protections from competitive encroachment.

A free market, my ass, right? 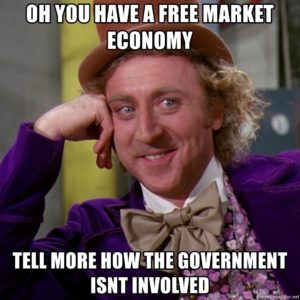 A 2015 study by the Phoenix Center showed that a Honda Accord’s price increased by more than $500 if Honda dealers were at least 30 miles apart.

After 100 years and the advent of the internet, these policies were stupid.

In the post-COVID world, they’re utterly useless and likely to fall in the future.

Tesla has taken the lead in the dealership model. The company allows direct sales that include the full application and digital signatures. Deliveries are made to centers that will enable buyers to pick up their cars quickly. They have no middlemen, and they reduce the price by eliminating the markup.

Rather than having their sales members work on commission, everyone is on salary.

But here’s the problem. Right now, their direct sales method is still restricted, limited, or banned in states. And that’s even at a time that most of the big manufacturers would LOVE to return to a model that let them sell to consumers.

The problem is that lobbying like the National Automobile Dealer Association has worked for years to press against direct sales models. I think their reckoning is coming thanks to EV. After all, if governments want Americans to drive EVs, they need to eliminate as much bureaucracy and price-fixing as possible to make them more affordable.

The reality is that bad policy is bad policy. We’re watching states and Congress yank down decades of bad cannabis policy and create a freer and more flourishing market.

At some point, a company like Swift may represent a takeover target for a larger automotive company in the U.S. that wants to break the dealership model and force greater flexibility along its supply chain. The EV revolution represents a significant opportunity for these companies to do so in the future.

Ford Motors (F) has already implemented new rules around the sales of its new electric SUV, the Mustang Mach E. Under those new rules, dealerships can’t drop the price under the MSRP, making it a haggle-free price like many other online used-car dealership policies.

Looking forward, auto dealers are facing a reckoning after decades of political power.

We saw this happen to taxi cabs in New York with the Uber (UBER) and Lyft (LYFT) revolution.

We’ve seen it happen with hotels in the wake of Airbnb.

Giants will fall thanks to technology and innovation.

The EV revolution will redefine the future of the automotive engine and the entire sales supply chain. These are the very trends I’m always exploiting in my Portfolio Accelerator.

My 12-10 WatchList, the Morning Outlook, and a Dashing IPO

The Wednesday Watch List, Vaccine Racing, and a Lesson in Options

The Tuesday Watch List, The Long Winter, And The American Revival