Know What You Own and Why You Own It

This headline says it all.

I can’t stress this enough.

This simple sentence was a mantra of legendary investor Peter Lynch.

It doesn’t matter if you’re a long-term investor or a day-trader flipping options contracts.

You need to know exactly what you’re buying at all times.

I know that it sounds simple. But over the last month, we’ve watched professional investors and mom and pop investors make big mistakes because they ignored this simple rule.

I know I said we would talk about another simple and fun way to make money this morning.

That can wait until Monday.

This is too important.

If you’re not familiar with how crude markets work, there are two different prices.

First, there is the spot price. That is the price of crude oil or any commodity that is ready for sale today. They vary on time and geographic locations. Because of price uniformity, spot prices make it very difficult for anyone to engage in arbitrage to different markets because of the cost of transport. (So you can’t buy something for $25 in one place and expect to sell it to another market for $30 because the cost to transport to that second market is likely an additional $5).

The second price is the futures contract. If you’re not familiar with futures, they work very similarly to call and put options.

Futures allow a buyer or seller to lock in a desired price for a commodity on a future day.

So, if you purchase a May 2020 oil futures contract, you can lock in a price and take delivery of it according to terms of the contract by the end of the month. In the United States – WTI crude oil delivery occurs in Cushing, Oklahoma.

This subtle difference in pricing between spot and futures became a lightning rod of confusion for many people.

All because a lot of people didn’t know what they owned when they purchased the world’s largest oil ETF – the United States Oil Fund (USO).

A lot of people think that the USO replicates the SPOT price and performance of oil.

Here’s the problem. This ETF doesn’t track the current price of oil. It does its best to track the front-month futures contract.

Over the last two weeks, it was selling the May 2020 contract and buying the June 2020 contract. And for years, this worked because the spot price of crude was usually pretty close to the value of those contracts.

Unfortunately, Bloomberg reports that a week or so ago, the USO fund owned 25% of all next-month contracts and was going to start selling these contracts at rock bottom prices to roll into the next month contract.

What’s troublesome about our current oil market is that we are now locked in a market phenomenon called contango.

This means that the price of futures contracts out a few months are more expensive than the “front month” or next expiring contract. The June contract for crude oil hit $13 this week, while the July contract traded at $23.

This means that the USO fund would have to sell the June contract before expiration – and then buy that next month for almost double the price. A fund like this is guaranteed to lose money.

When the May contract bottomed out on Monday, it went negative, closing the day at MINUS $37.63. 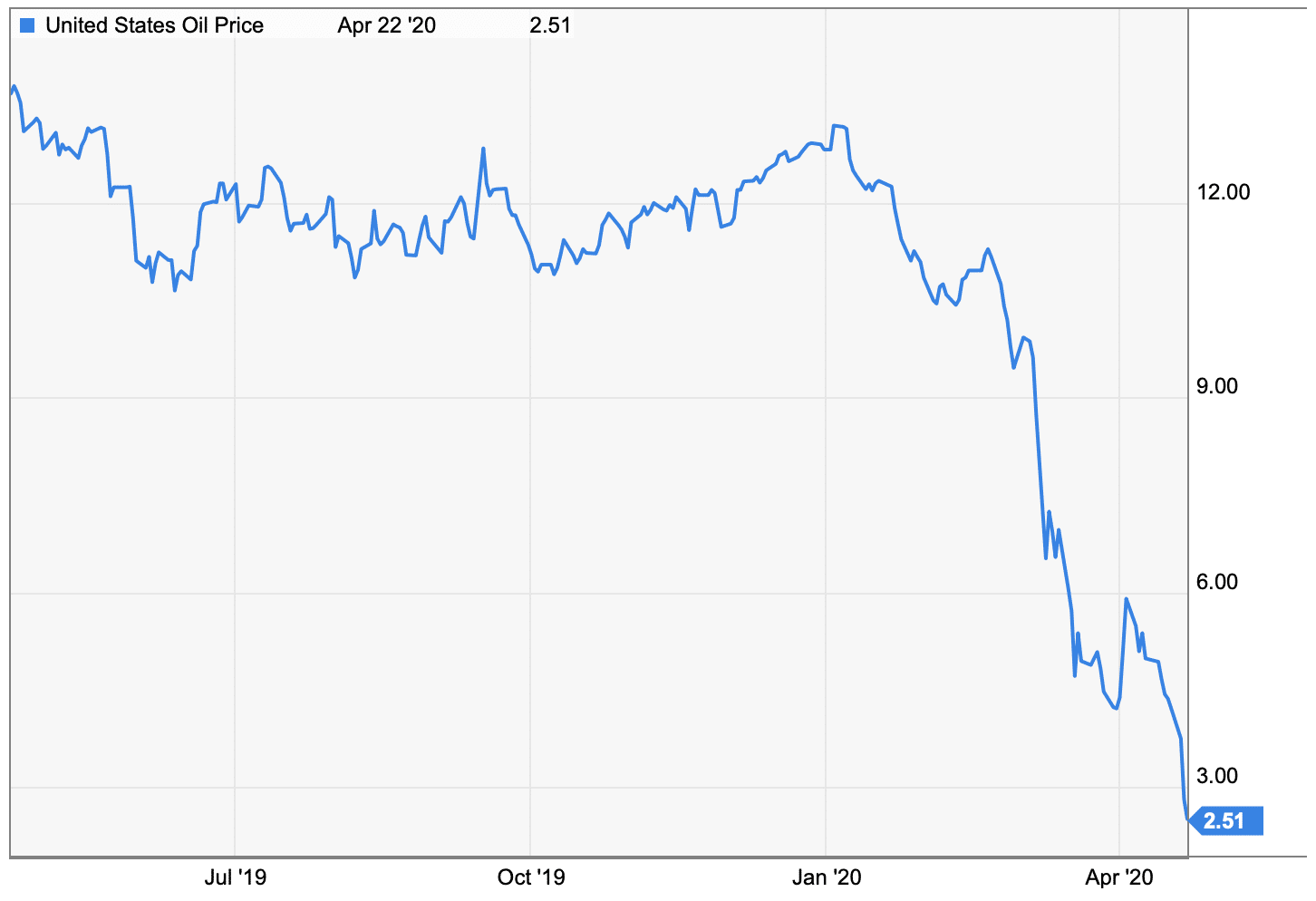 The USO fund has historically been a hedging mechanism for active oil traders.

But on Tuesday, Bloomberg reported that 152,073 investors on the retail platform Robinhood bought into the USO fund. There can only be one explanation. They thought that they were snapping up spot crude oil at $1 per barrel with the expectation that there is nowhere for prices to go but higher. 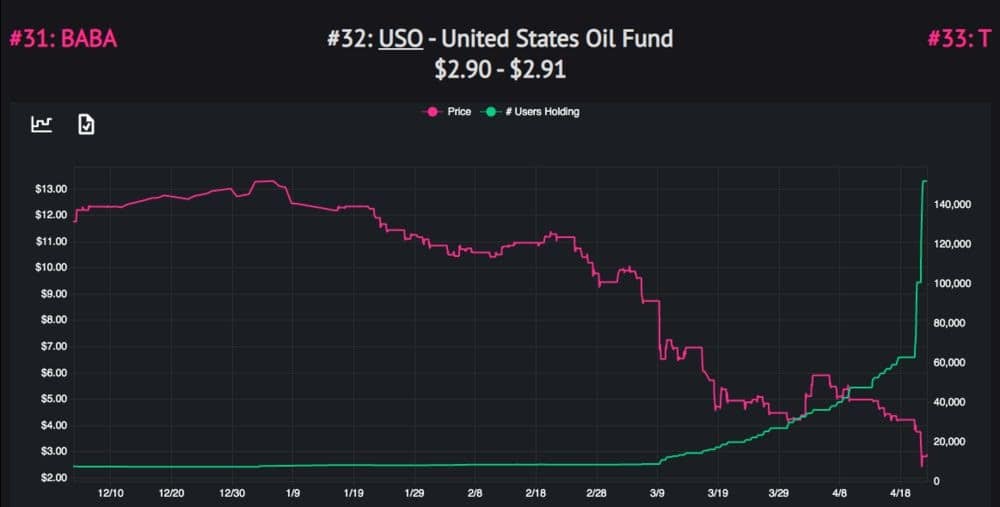 If we take a step back, however, we see this trend had picked up in early March. The pink line is the price of the USO fund since December. The green line is the number of retail buyers moving into the fund earlier over the same time period.

A lot of people started buying the USO fund in early March. The figure hit about 40,000 buyers around April 8, two weeks before the carnage. They thought they were buying crude oil at a very cheap level.

In reality, they were buying into a fund that was going to start dumping cheap contracts for more expensive “next month contracts.”

The investors don’t know what they bought.

There is good news. The USO fund has now suspended operations for the time being.

Thank goodness, especially if an analyst at Mizuho Securities’s prediction is correct. Paul Sankey predicted that WTI crude prices could fall to NEGATIVE $100 per barrel.

But that doesn’t solve the underlying problem that too many people aren’t aware of contango or the rollover costs associated with buying and flipping futures contracts on a month-to-month basis.

I can’t stress how important it is to do your research. Ask questions.

It’s not easy to keep up with so much information and all of the buying options that exist.

Now some people think that the smart play is simply to hire an advisor. But if he’s spending more time on the golf course than doing research, are you really living by the lesson of knowing what you own and why you own it?

The USO isn’t the only example of an investment gone wrong for many people in the last month alone.

Take Luckin Coffee (NYSE: LK). For years, we’ve heard this is going to be the strongest competitor in China to Starbucks Corporation (NASDAQ: SBUX). Hedge funds and money managers like Melvin Capital Management and Bank of America Securities had tens of millions of dollars in this company’s stock. 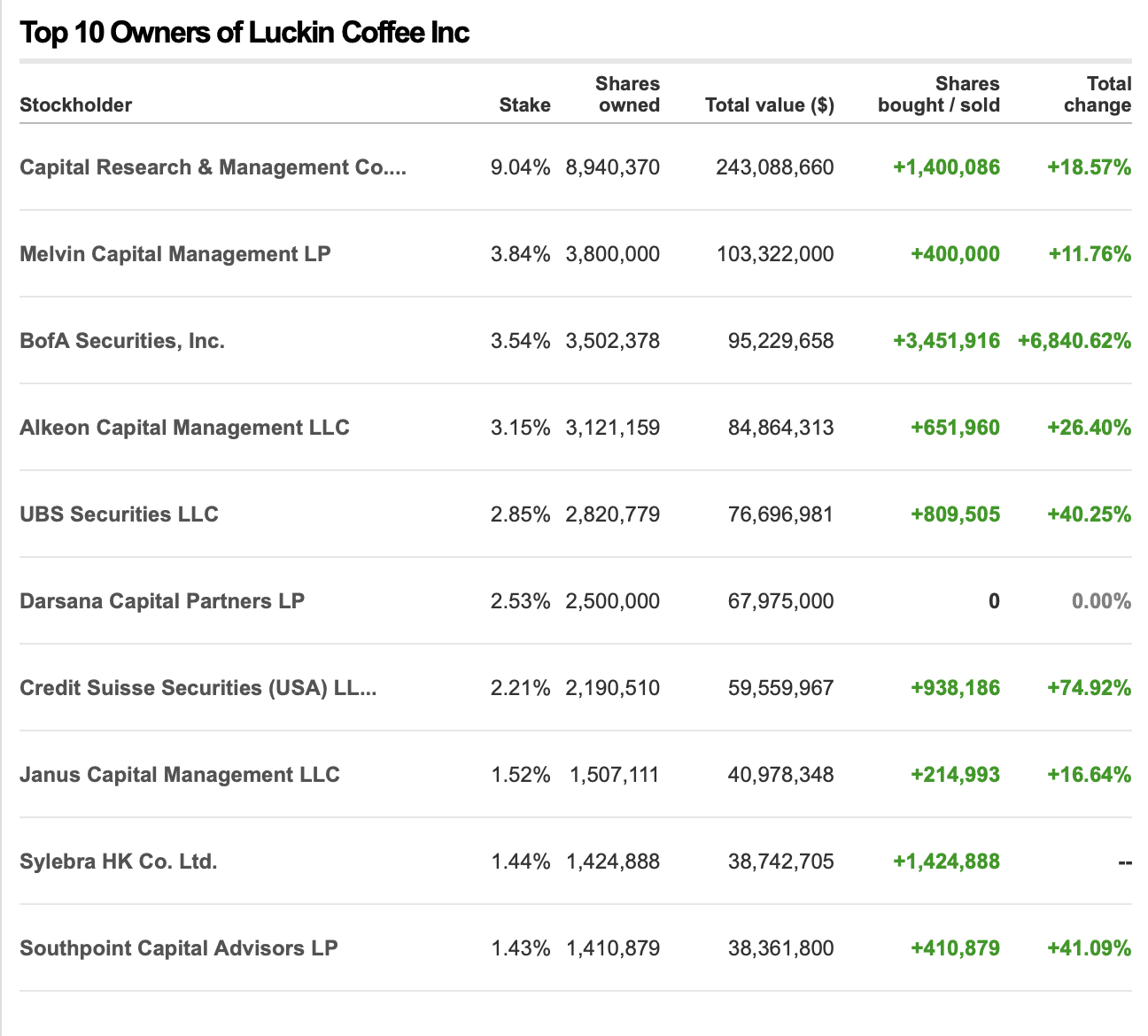 But it turns out that the Chinese company engaged in massive accounting fraud. These investors ignored warnings from analysts across Wall Street.

Shares of Luckin fell by 85% on April 1 after the story broke. In the case of Capital Research & Management – the largest owner – that could be a $206 million loss on paper.

People didn’t know what they owned or why they owned it. In most cases, they just really loved the narrative that China would be the world’s largest consumer market – and justified owning a company in a country where questionable accounting practices are the norm.

Finally, we saw massive liquidations in exchange traded notes (ETNs) in March, with many investors wondering how their positions imploded.

It turns out many investors confused the difference between an ETN – which is a structured product of senior debt – while an ETF is an investment in an underlying commodity like gold, oil, or stocks.

Knowing What I Own

I handle all of my investments. I prefer to be in control of my decisions, my wealth, and my future.

So, I don’t speculate because I hear a cool story on television or in the pages of Barron’s.

There’s a difference between a cool story and a great investment.

I follow a very regimented buying process that helps me unlock the best long-term investments possible.

I dig into their annual reports, look for subtle clues about their future like – are they growing their price to book every year.”

I learn about their management. I don’t ever think that I’m buying a stock.

Instead, I approach it like I’m buying a company.

I approach it like I would in any of my personal businesses.

I know everything about the companies I buy, and what they mean to me.

If you’re not approaching your investments the same way, you might find yourself learning some difficult lessons about what sits in your portfolio.

In Case You Missed It

Jeff Bishop just unveiled the types of companies that he wants to buy and own as he builds his wealth coming out of the COVID-19 crisis.

While everyone else is fearful, he sees a buying opportunity that comes along once in a generation. My simple strategy is for elite investors who want to own stocks prepared to explode in price in the months and years ahead.

There will be many stocks set to surge more than 1,000% in the years ahead. And if you want to capture those gains, now is the time to be aggressive. Watch my brief recap, right here. 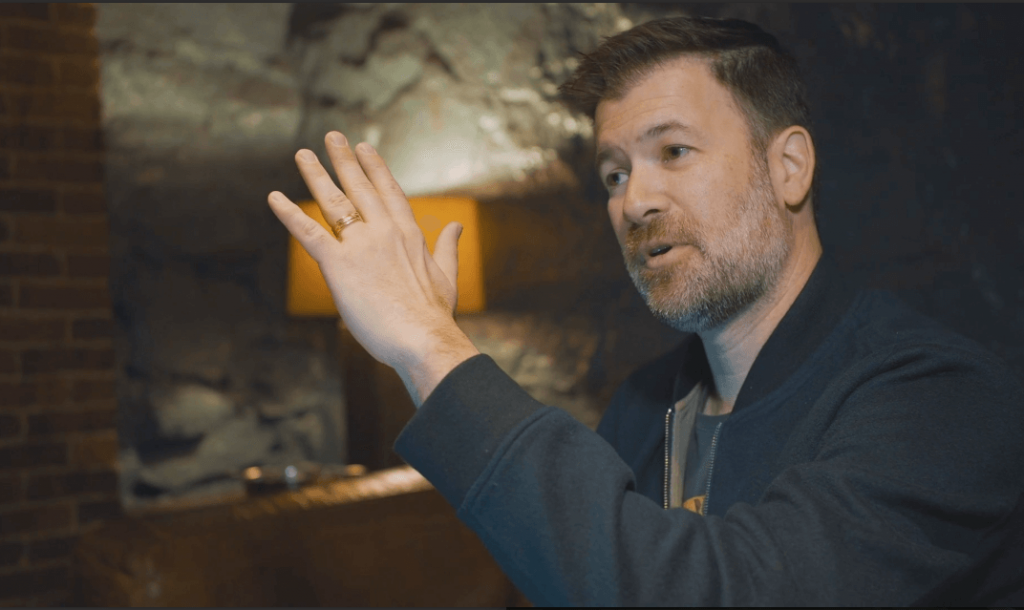