What Are P/E Ratios?

P/E ratios are a great way to value stocks and create sound strategies for trading. More specifically, using what’s known as the S&P 500 P/E ratio can be a useful tool to evaluate the stock market as a whole, giving you a more comprehensive idea of the current trends compared to past performance. Keep reading to learn more about P/E ratios, stock market indexes, and the benefits and challenges of using a P/E for the S&P 500.

What Are P/E Ratios? 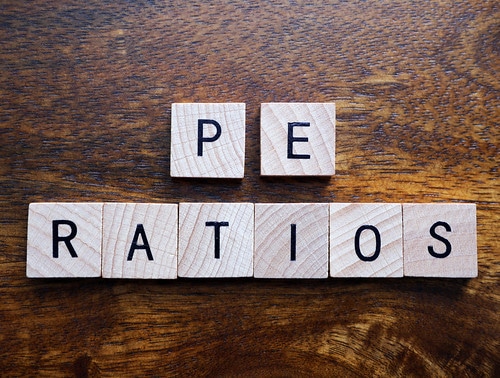 Price-to-earnings ratios, also known as P/E ratios, earnings multiples, or price multiples, are used to value a company by measuring its current share price against the earnings per share. Investors and analysts alike use P/E ratios to evaluate the relative value of a company’s shares. Additionally, it is sometimes used to compare markets over time or to compare a company’s performance against its past performance.

Determining a stock’s P/E ratio is simple enough — You just divide the current stock price, or the “P” in the equation, by an individual share’s earnings, which is represented by the “E” in the equation. The earnings per share, commonly referred to by the acronym EPS, can either be found in a company’s earnings release or in the TTM, which stands for “trailing 12 months.”

The term “trailing 12 months” refers to a company’s most recent 12 months of financial reporting data. Since it represents the most recent data instead of the data from a fiscal year, it’s a great way to evaluate a full year of financial data in an annualized format, at any point in the year.

Though analyzing a company’s annual earnings are often beneficial enough when determining a stock’s value, analysts sometimes prefer to evaluate a company’s long-term valuation trends by finding the average earnings for the past 10 or 30 years. This method is particularly useful when attempting to gauge the overall value of a stock index, like the S&P 500.

What Is a Stock Market Index?

The S&P 500 is a stock market index that focuses on the United States’ 500 largest companies, including stocks like Johnson & Johnson, AT&T, Amazon, and Facebook. The S&P 500 is a capitalization index, meaning that companies in the collection with a larger market capitalization have more of an impact on its overall performance than companies that have a less substantial market cap. Market capitalization refers to the total market value of all of a company’s outstanding shares. In other words, it’s how much money it would cost to purchase every share of a company at the current market price.

In order for a company to be included in this stock market index, it must:

The S&P 500 P/E ratio is a useful way to determine if mutual funds or stocks are priced fairly because it gives you a deeper understanding of the average value of large-cap stock in the United States.

You can use the current market P/E ratio to determine whether its a good time to buy or sell shares by comparing it to the P/E ratio history for the S&P 500. For example, if the price-to-earnings ratio is below its historical mean on the S&P 500, it could indicate a great time to purchase stocks from large-cap companies. Conversely, a P/E that is above the historical average could mean that stocks are currently overpriced and likely heading for a decline.

Since the 1870s, stocks have had an average P/E ratio on the S&P 500 of about 16.8. You can use this information to your benefit by comparing the current P/E for the market to the historical mean.

If the current price-to-earnings ratio of the S&P 500 is substantially higher than 16.8, the historical mean, it would be reasonable to guess that stock prices might fall at some point in the near future. On the other hand, if the P/E is lower than 16.8, you might expect stock prices to rise.

Though the current stock market P/E ratio can be extremely useful, it’s inadvisable to rely solely on this analysis tool when making your trading decisions. This is because the stock market P/E is often a delayed representation of the actual economic reality. In situations where the earnings fall faster than the prices, for example, it can cause the P/E ratio to be misleadingly high, making it a lagging or inconsistent indicator. Besides, the past doesn’t always accurately predict future performance.

There are two significant times in history when the S&P P/E lagged to the point of being a relatively useless value indicator: in 1929 and 2009. This lag occurs because the current price aspect of the formula is readily available, but the earnings are a little more difficult to accurately determine. In other words, a wise investor doesn’t take a high or low P/E as a selling signal. Instead, they use the S&P 500’s P/E as a way to evaluate the health of the stock market.

When calculating the price-to-earnings ratio for the S&P 500 stock index, you generally divide the current market price of the index by its reported earnings for the trailing 12 months. After the stock market took a hit in 2009, causing earnings to fall dangerously close to zero, this ratio was a little skewed, showing ratios in the triple digits despite the actual market changes. Interestingly, the same thing happened during the market crash of 1929.

Benjamin Graham, a value investor and famous economist during the 1920s and 1930s, teamed up with David Dodd to create a more accurate way of calculating the stock market’s value. They published their findings in the 1934 classic, “Security Analysis.”

Both Graham and Dodd believed that the business cycle’s extreme and temporary fluctuations caused P/E ratios to be illogical. Their proposed solution was to divide the current market price by the average earnings of the last five, seven, or 10 years.

Robert Shiller, a Yale professor and author of “Irrational Exuberance,” has since encouraged and popularized the use of this ratio among investors, earning it the name the “Shiller P/E Ratio” among some circles. This ratio is more commonly referred to as the P/E10 or the Cyclically Adjusted P/E Ratio, CAPE for short. Instead of using a broad, multi-year average for the earnings, Shiller suggests using a 10-year average that has been adjusted for inflation.