4 Chart Patterns Every Trader Should Know

Monitoring the chart patterns is one of the most basic technical analysis activities that day-traders and swing traders apply. This is because chart patterns can help you predict the future price behavior more accurately. Basically, the pattern shows that the price is not as random as many traders believe – the price follows repetitive movements and when it forms particular patterns, it tends to act in a specific manner.

What are some of the patterns that can help you to become a more profitable trader? Check this list and try it on your demo:

The gap is a free space between two “candles” on the chart. It takes place when the price of a share opens visibly higher or lower than the previous day’s close. The gap is an important pattern because it comes with a new resistance/support level – gaps higher form a new support line that pushes the price up, while the gaps lower form a new resistance line, which pushes the price down. If you combine the gaps with more technical indicators, such as volume and momentum indicators, you can get even better signals.

In general, gaps occur when there is strong buying or selling in premarket trading from institutional traders.

Some beginners do not understand that the gap is mostly a trend continuation signal, and want to profit by trading against the general trend, waiting for the price to come back. Professional traders tend to open positions in the direction of the gap, particularly when it is accompanied by high volume. Here is how the gap looks like visually:

Double tops and double bottoms are trend reversal patterns, suggesting that they point to a future change in the price direction. Whenever the pattern is formed, the trader is expected to open positions against the trend.

Double bottom is the same pattern described above, but is simply a mirrored version of it. Double bottom is formed by two lows that reach the same level in a downtrend. If during a bearish market the price cannot break the support level twice, then a trend reversal may come and it is time to buy.

Here is the double bottom on Amazon’s share price:

The head and shoulders is one of the most popular and accurate trend reversal patterns, which often occur in an uptrend. The pattern is formed by three successive peaks, where the middle one is the highest (the head) and the other two stay relatively at the same level (shoulders). The intermediate support line formed between the peaks is often referred to as the neckline.

Despite the fact that the main components of this figure are the three peaks (head and shoulders), you should consider additional important factors that make this pattern even more precise:

Ideally, the shoulders should be symmetrical and aligned, but the signal is reliable even if one of the shoulders is higher or lower than the other one.

Here is an image showing the head and shoulders pattern: 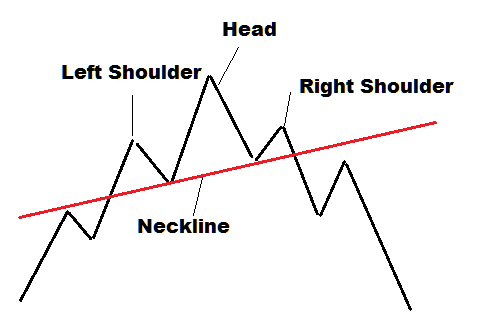 The flag and pennant patterns are trend continuation signals, like the gap. They suggest that you should open positions in the direction of the current trend. They are some of the most frequent patterns. Both flags and pennants appear after a sharp movement up or down.

Now, let’s speak about their construction – the flag has two parts: the straight line, which is the flagpole, and the flag itself. The flagpole represents the sharp movement of the price, which is a short-time rally or price collapse. The flag is made of almost parallel lines. When the price breaks the flag line, you should start trading in the direction of the trend.

The pennant has the same two parts, but instead of the flag formation with parallel lines, it has intersecting lines made of peaks and lows. You can note how the highs tend to gradually reduce while the lows go up. The pattern resembles a triangle, which makes it difficult for a beginner to read it. However, you should know that a triangle needs over 30 candles and it does not come after a ‘flagpole’. The pennant has the same rules as the flag.

And here is a pennant pattern (downtrend) on Amazon’s share price:

In sum, this is a basic introduction to chart patterns and how to read certain signals in order to assist you in making better trades.  We suggest reading more in-depth articles (such as on candlestick analysis, etc.) for a more complete understanding. Best of luck in your future trading efforts!