S tock market return numbers illustrate the average profit that traders make on their investments. According to 140 years of stock market data from Goldman Sachs, the average return on a stock held for a decade is 9.2%, while the S&P 500 reports a 13.6% yearly average return. Warren Buffett of Berkshire Hathaway, one of the most successful stock market investors in the world, frequently states that investors should expect an annual stock return of 6% to 7%. The longer you hold your investments, the higher return you can expect to make on your initial stock or asset purchase.

What Is Stock Market Return?

To find the average stock market return, industry experts review various benchmarks and indices over specified periods. A primary stock market in the United States is the S&P 500, where investors trade the 500 national stocks with the largest market cap, calculated by multiplying the stock’s market price per share by the number of remaining shares. Another is the Dow Jones Industrial Average, which indexes 30 major tech and industrial firms such as Boeing, Microsoft, Walmart, and Apple. When reporting the average stock market return on investment, experts typically look to the Dow and the S&P 500 as these indices carry the most influence in the U.S.

However, serious investors must also consider the average return of other assets, including but not limited to foreign, mid-cap, and small-cap stocks depending on their interests and goals. Alternative indices can be used to predict the performance of these financial products. In either case, keep in mind that past performance does not necessarily indicate future performance.

What Is the Average Stock Market Return?

Stocks in the S&P are chosen to reflect the facets of the market as far as industry, liquidity, and market cap. A group of S&P analysts forms a committee that chooses the stocks for inclusion in the index.

Individual stocks make up these influential indices, which means the fluctuation of a single company can have an outsized effect. Remember that these sources represent huge firms with substantial market shares. Looking at indices for smaller stocks can also be insightful. For example, the small-cap Russell 2000 Index showed average returns of 14.65% in 2017 and -11.01% in 2018, bouncing back to 16.98% in the first half of 2019.

What Is the Historic Stock Market Return?

You can see the importance of long-term investing when you look at average returns over extended periods. For example, reported 10-year returns from 2009 to 2019 include:

These numbers represent the recovery period after the nation’s 2008 financial crisis. When we look at 20-year returns, the average numbers reflect the market decline from that era as well as the dot-com recession that followed 9/11:

These are the historic yearly returns for the S&P 500, which may inspire your own research. These numbers do not reflect inflation but do include dividend payout percentages.

While average stock market return numbers receive an adjustment for inflation from the Consumer Price Index, many analysts doubt the accuracy of these calculations. This helps explain why investors aiming for the historic 10% return should actually set their sights on about 7% for realistic projections of profit.

Attempts to time the market by inexperienced (and even experienced) investors often result in a lower-than-average return. Knowing when to purchase and sell stocks will enhance profitability. For example, you should follow the old adage of buy low and sell high, rather than entering the market at a peak or attempting to leave at a low point. Holding a stock for decades rather than months or years increases its potential returns.

How Can I Maximize My Stock Market Return? 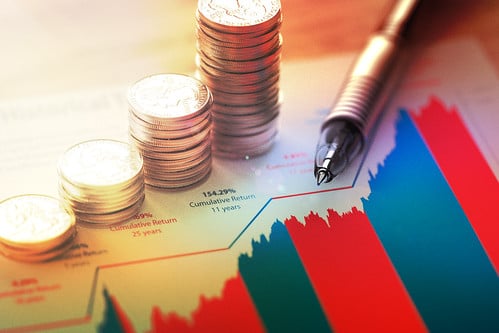 Although we cannot truly know the future of an investment based on its past performance, we can see that long-term stock market investors generally earn stock market returns that outpace the rate of inflation (historically about 3% from World War II through today).

Sticking to a solid investment strategy that supports a well-thought-out financial plan can help you weather the short-term storms of the stock market and ride it out to increase your returns. Choose investments based on your financial goals, your tolerance for risk, how soon you need the money back, and your overall financial picture. When you want a faster return than you can expect from the stock market, put your savings in a money market fund or another high-liquidity, low-risk account.

Stock market investors must also consider their age when making an investment plan. If you have decades to go until retirement, you can take more risks with your investments with the knowledge that your overall stock return will rebound over time. Investors who are approaching retirement have less time to recover from drops in stock value, so they should limit risk and choose financial assets accordingly.

Index products like ETFs and mutual funds are a smart choice for investors who want to beat the performance of active fund managers. These low-cost assets shield your portfolio from volatility. They also make sense for investors who want to harness the potential returns of the S&P 500 but cannot afford to purchase shares in the massive companies that trade on the S&P. An exchange-traded S&P 500 index fund will reflect the performance of the actual S&P. However, you’ll need the help of a stockbroker to purchase mutual funds and ETFs.

Holding investments for the long-term helps you optimize your returns in the stock market. Avoid making moves during a bull market that you might regret when things get lean. By the same token, a bear market doesn’t mean it’s time to pack it in. Instead, seek discounts on stocks you couldn’t afford in a healthier market and set your sights on future returns.

When we look at the average returns above, they apply only to the investors who buy and hold assets. Frequent trading increases the risk of investing and limits the rewards through losses, taxes, fees, and commissions. For the optimal stock return, plan for the long term.