Short Santander to Profit from a Troubled Auto Loan Market

Santander is one of the leading auto loan providers in the country. However, the auto loan market is currently showing preference for subprime and deep subprime loans. The situation is reminiscent of the mortgage market in 2008, when the market saw a surge in subprime mortgage loans. This growing trend may lead to instability in the broader auto loan market and eventually harm key players such as Santander. Another issue which shows the growing risk for the market is increasing securitization of subprime and deep subprime loans. Increasing securitization generally leads to more risk taking behavior by loan providers as they increase their exposure to this risky segment of the market. According to Morgan Stanley, the share of subprime auto-loan securitizations considered deep subprime surged to 32.5 % now from 5.1 % in 2010. 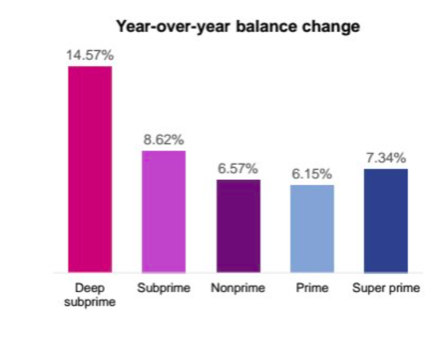 While the broader auto loan market is moving towards a risk zone, Santander has its own micro elements which makes it even more prone to collapse, should the markets make even a slight negative move. Santander Consumer is 59% owned by Santander’s US holding company, which failed US Federal Reserve’s annual stress test for three consecutive years. Further, the company has been found to be guilty of not adhering to proper norms and procedures. Santander Holdings has been asked to improve its oversight of its troubled subprime auto-lending unit, Santander Consumer USA Inc. In its order, the Fed said its examiners had found problems in Santander Consumer USA Inc.’s compliance risk management program. The company was forced to pay $25.9 million to settle  investigations by the Attorneys General in Massachusetts and Delaware into its financing and securitization of subprime auto loans.

However, these regulatory issues are not the only concerns faced by Santander. The company recently announced its financial results, where it failed to meet consensus estimates for its fourth quarter estimates. Its fourth quarter net income of $0.17 came in 50% lower than the consensus estimate of $0.34 per share income. Santander is all set to announce its first quarter results and the picture does not look pretty.

At this point of time, it would be pertinent to have a look at its most recent full year results. For FY 2016, Santander saw its net income per common share (diluted) for FY 2016 drop to $2.13,  from $2.31 a year earlier. Delinquency ratio for  individually  acquired retail instalment contracts held for investment increased from 4.4% to 5.1%. Net leased vehicle income rose to $492 million from $312 million, which is likely to have a cannibalistic impact on its loan originations. The metrics also shows that the company customers may be feeling a little stretched out and hence opting for lease instead of taking auto loans. In general, lease volume serves as a harbinger of (bad) things to come. 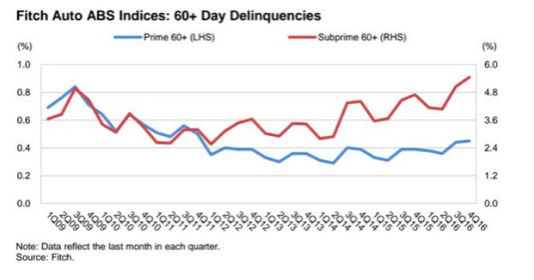 In many ways, the auto market is shaping like the pre-crisis mortgage market. The economy turned around after 2009, making car buying hip again. However, due to a distressed economy, many borrowers still have low credit rating. At the same time, Feds are pursuing a high interest policy, which is making debt more and more expensive. Wage growth has been unequal. Upper wages have increased disproportionately. So, while asset price increased, larger number of Americans are unable to service debts. To top it all, certain new entrant lenders have become increasingly willing to loosen creditworthiness scrutiny to gain US market share at all costs. The result is an increasing number of delinquencies. A number of these ills are similar to what plagued the mortgage market in 2007.

There are a number of metrics of the auto loan market that are comparable to those we saw in 2008 during the height of the subprime mortgage crisis. First, there is an increase in Average New Vehicle Loan Amount which in Q4 2016 stood at $30,621. In Q4 2007, the same number for the mortgage market stood at $160,000. This implies that loans are being disbursed with extremely low down payment. Secondly, there is an alarming rise in the share of the subprime auto loan in the broad auto loan market. This was 25% last quarter, while it was 21% in the final quarters of 2007. Lastly, the percentage of subprime loan delinquencies has increased from 4.66% in January 2016 to 5.09% one year later.

There are other critical metrics. The average loan duration has started increasing. The average loan terms for new vehicles and used vehicles from franchise dealers increased by one month, touching 68 (one month higher YOY) and 66 months respectively for the first quarter of 2016, while the average loan term for used vehicles from independent dealers touched 58 months for the same time period. Another important metric is also indicative of the problem. Leasing made up an all-time high of 31.1% of new-vehicle transactions –including cash deals — in the quarter, compared with 26.7% a year  earlier in the first quarter of 2016. As explained earlier, this shows that consumers are stretched beyond usual, and increases the chance that leasing companies are left with a massive inventory in case of lease discontinuation. The leasing data, coupled with increasing average loan duration shows that consumers are getting out of their comfort zone for new vehicles. 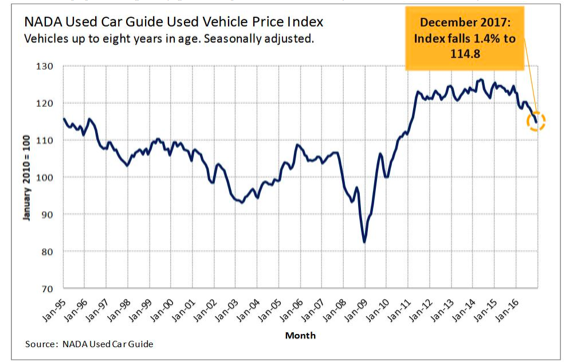 Overall, both the auto loan market and Santander are looking at some difficult time ahead. So, how do the investors profit from this bleak scenario? One way is to short Santander stock. The stock is up over 11% on a 12-months basis but starting to show signs of weakness, losing 3% of its value this year so far. The declining trend is likely to continue as the company showed weak financials in its previous quarter. It is set to repeat the performance this quarter as well, which may further batter the stock price. The negative trend in the overall auto loan market may further fuel the decline.

Our thesis is to short SC common stock with at least a one-year horizon. We don’t feel it is appropriate to place a specific price target on SC at this time. It is simply impossible to calculate the damage to SC’s balance sheet as credit quality and delinquencies deteriorate. Our plan is remain short this name until we see at least 2 consecutive quarters of increased FICO scores  which is a proxy for credit quality (for reference, only 13.8% of current retail contracts have a FICO of 640 or greater), stable or growth in its overall servicing portfolio, and meaningful declines in the Troubled Debt Restructurings (TDR).

Another note of caution we must bring up is the recent relationship with Banco Santander. In the last quarter, SC has touted its “$700 million inaugural transaction” with the bank. We are curious if this is a sign of potential trouble? Why is Banco Santander stepping in now to make these purchases?  Are there not enough buyers of this debt through domestic channels? As a helpful parent company, is Banco Santander taking on the riskier loans to help SC clean up its balance sheet? Time will tell, but this new relationship definitely merits attention.