Sometimes as traders we get so caught up into individual stock stories that we forget about the big picture and the economy.

I’ve been consistently collecting paychecks with long gold positions in the GLD ETF. Even as markets rose, this trade kept working for me week after week.

These profits from last Friday don’t include the call option premium I already collected.

Today, I want to dissect the trade for you and explain why it works, how I played it, what I expect going forward….And give you all a video trade review!

You see, there are times when trading gold can lead to fast and explosive profits. While others, you could be sitting in it for a long long time with nothing to show for it.

Find out what compelled me to jump in, and how we can profit from a trade like this in the future.


What is the purpose of gold?

You’ve probably heard people talk about the ‘safety trade’ before. They’re referring to where traders and investors put money when they expect a selloff in equities. Typically, this includes bonds and precious metals. It can also include certain currencies as well.

Now, just because these are safety trades doesn’t mean they don’t trade independent of their own market influences. We see gold rise when countries add it to their coffers as well as when jewelry demand spikes. Many investors use it as a hedge against inflation since gold is denominated in dollars. You can see the disconnect in the run in gold back in 2012. 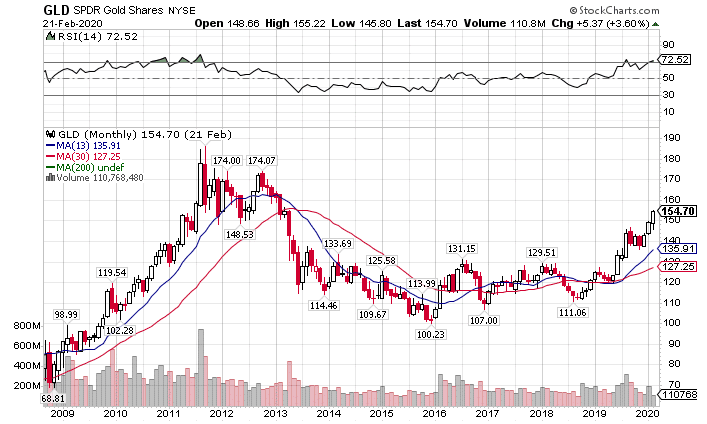 The past couple of years we’ve seen gold build a base and move consistently higher. This comes as investors worry about central bank policies and equities around the globe. The unabated rise in US stocks didn’t help to allay fears that a potential crash was coming. With the Fed’s easy money policies, many traders and investors continue to expect inflation in the future.

Let’s start with the hourly chart for GLD looking back a couple of months. 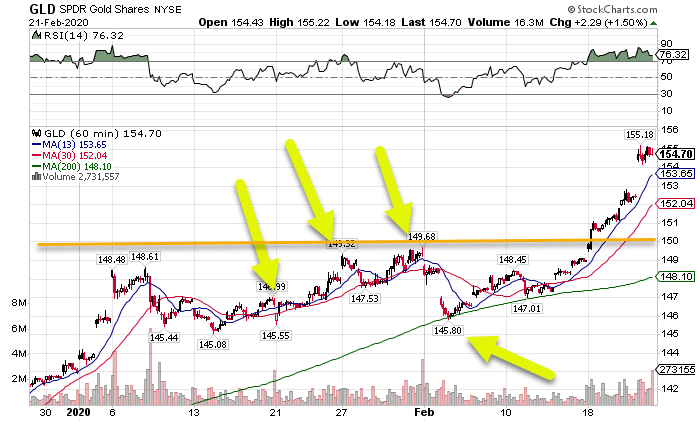 So I had a lot of reasons to go long gold, which is why I bought the $146 calls going out a month. That gave me time for the trade to work and a little bit of intrinsic value.

As the stock rose, it got near $150 before it fell. Then it came back up and topped out again. That was when I decided to sell call options against the ones that I held. But, I did short-dated expirations instead of the same expiration as the long options I held.

As the stock waffled around, the calls I sold expired, and I kept the full premium while still holding my long option. Effectively, that reduced the cost of my long call options.

So. I did it again. Now, the second set of calls I sold expired with the stock over the $150 strike price. That meant I still kept the premium, but I gave up any additional gains from my long calls past $150.

How I structured this trade

With an underlying bullish bias, I did what’s known as trading around a core position. That means while I would take long and short positions against gold, I always had a net long bias.

By now, you’ve probably heard me advocate for call credit spreads. Well, in this case, I did something slightly different. Let me explain.

In a call credit spread, I sell an option contract above the current price and buy another at a higher price to cap the trade. Both of these will have the same expiration.

However, this trade, I did things differently. I bought a call option on GLD that I held for over a month. Then I sold shorter-dated options above that call to give me a call debit spread.

Why would I do this?

Let’s first think about time decay. Time decay for an option increases at an exponential rate as you approach expiration. That means that the time decay for the shorter-dated call options I sold worked faster than the long-dated call I owned. This paid me more than if I simply bought a call option with the same expiration date as the one I sold.

Seems like a great idea. The thing is this isn’t as high of a probability as selling a credit spread. Any debit spread will always have a lower likelihood, all things being equal. Now, it is cheaper than only buying long calls. But, you cap your upside gains with the calls you sell.

To give you all a bit more love, I created a short video where I go over the trade from my perspective.