Patience. Wait For Your Setup. Strike.

There is so much money to be made in the markets right now, but if you don’t follow the steps above, you could be in for a world of hurt.

That’s why when I grab charts, I look for the creme brulee of stocks, and pulled out the most decadent dessert I could find for Bullseye Members. 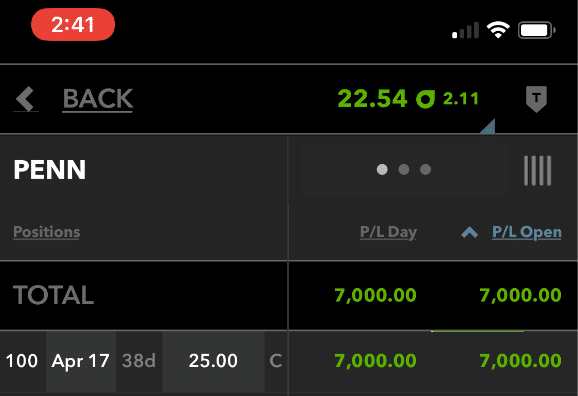 Bullseye Trades isn’t just one trade a week, it’s a way to give the market the middle finger!

If you walk into this week unprepared, you might as well set your cash on fire to keep you warm on the streets.

Otherwise, listen up as I lay out the case for what we’re seeing and where we’re going.

I’m going to walk you through some of the most critical charts, and levels that you need to be aware of. There is opportunity out there, but only if you know where to look.

I make no bones about it – this slide isn’t over by any stretch. You can’t shut down the world economy and expect that a few Fed rate cuts will paper over the terminal illness of the Coronavirus.

We’re sick, and it’s the market who needs medical care.

Last week saw not one but two limit-down days to kick off the morning. It’s like running late for an appointment only to have someone stop you in the lobby for 15 minutes.

Right out of the chute, markets cratered Wednesday and Thursday, finishing at the dead lows of the session. 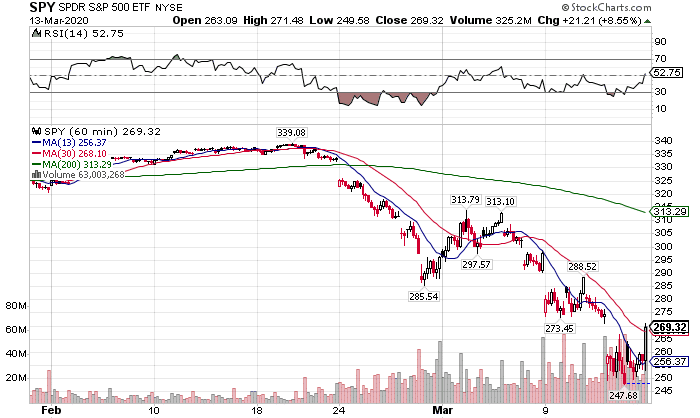 This isn’t a chart you want to see for a market index. It’s something you’d expect for JC Penny or some other ‘80s brand going out of business (ala Radioshack.)

Picking the right sectors could save your retirement. If you didn’t see it, I laid out the top performer yesterday you probably didn’t even know about.

The worst of it was the small caps. They got smoked in the bonfire sale that was the selloff. 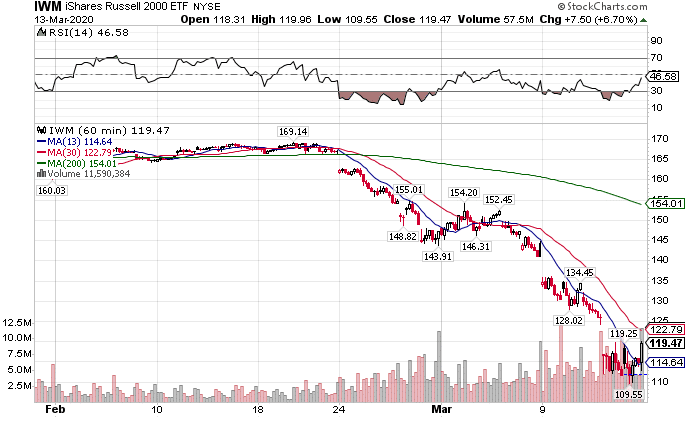 I don’t know what politicians think they can do, but it will take a Herculean effort to heal this kind of damage. Small businesses can’t sustain a shutdown for months on end. They need some certainty, some clarity as to what to expect. Without that, they’re sailing off the edge of the world.

During typical selloffs, gold becomes the favorite place to hide money, like a child hoping the market won’t find them.

My, how wrong they were.

With the Fed’s accommodative policy for the better part of a decade, loose money found its ways into the dark corners of the investment world. Gold received inordinate attention, as investors hedged their stupidity with the veil of traditional protection.

This week we saw their facade crumble. 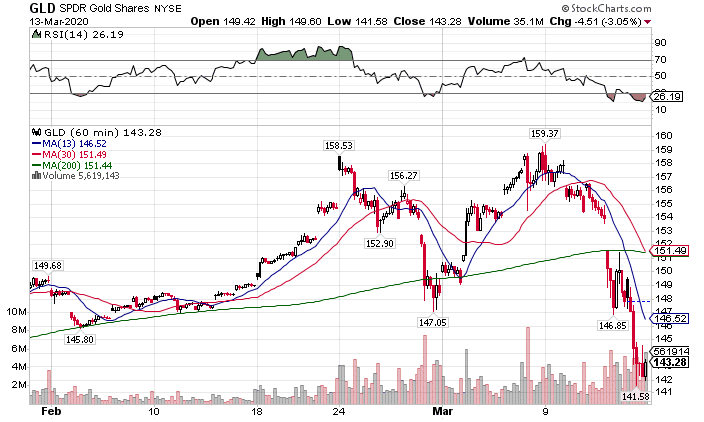 Sure, on the days where the market didn’t limit down, gold managed a rally or two. Otherwise, mass liquidations dragged traders out of their positions kicking and screaming for the toddlers they were – because only a child would expect that gold would save them from consistently overvalued equities.

And Then The Bonds Went Bye-Bye

For one brief moment, like 5-star college football recruits, bonds garnered the attention of investors and the Federal Reserve. In two days, treasuries managed to rally more than any other point in recent history. 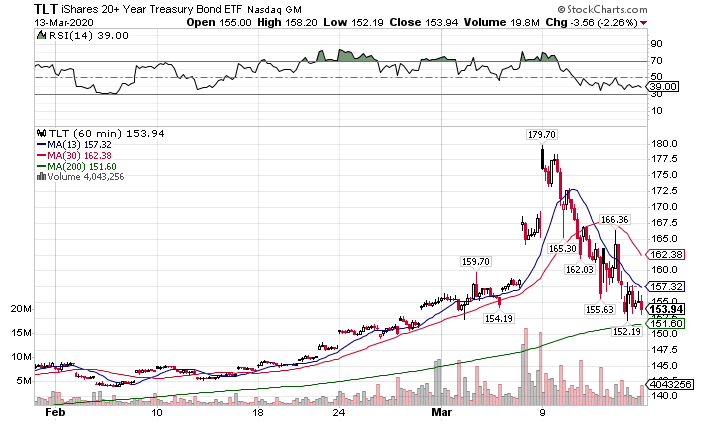 Yet, like everything else built on a mountain of B.S. the run quickly pooped out. Is this just a respite in a larger treasury run? It might be…and it might be my Bullseye pick this week. But which contract and price?

Point is, you can navigate this market. Not just lose less than the average. But really create some true wealth.

Bet You Didn’t See This One

While everyone was losing their minds, they probably didn’t see the US Dollar take off with the firecracker lit under its rear end. 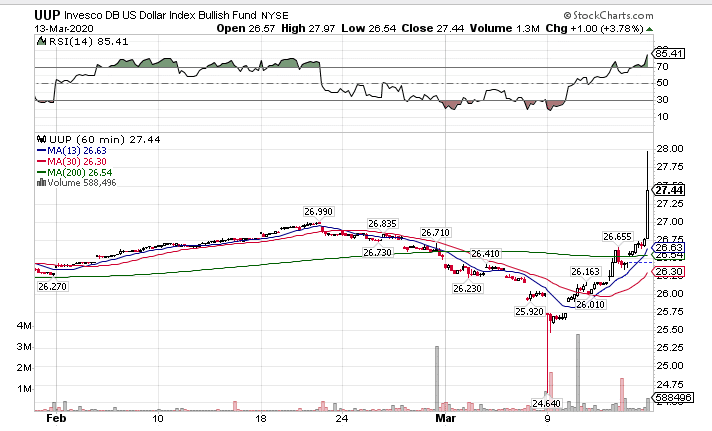 Let me lay something out for you. The U.S. Dollar doesn’t move like that unless there is white-eyed terror in people. That’s indicative of true panic, the kind that led to a run on the banks that created the Federal Reserve.

Here’s another piece of corndog to digest for you – the Fed added liquidity to the system and dropped interest rates. So why is the dollar rising?

A 50% Retracement Is A Real Possibility

None of us have any idea when the restrictions will be lifted. Even if life returns to normal for many of us, those with respiratory illnesses and older folks remain at risk. The U.K. recently asked seniors to prepare for 4 months of isolation!

Seniors, by the way, have a lot more discretionary income to spend than most of us. So don’t think we’ll just return to normal. Even if the main wave only lasts 30 days, the full impact will take months, if not years to work out.

A 50% retracement in equities might be generous. But consider the amount of passive investing and leverage taken by investors. This whole herd mentality gets people moving in one direction far beyond what’s rational.

So, Are You A Sheep or A Wolf?

Do you follow the herd or stalk your prey with the stealth of a leopard and the stamina of a cheetah?

Profits come to those who take action, those who grab hold of their trades and shake them for all their worth.

You don’t need to just accept what your 401K offers you. My trading masterclass offers you the tools to take charge of your investments and make your own decisions instead of following everyone else.