What can we learn from my 5-year old son…

Who managed to earn several thousand dollars – in a paper account – in less than 24 hours?

If I put a test to you…to have fun and still make a profit, do you think you could handle it? 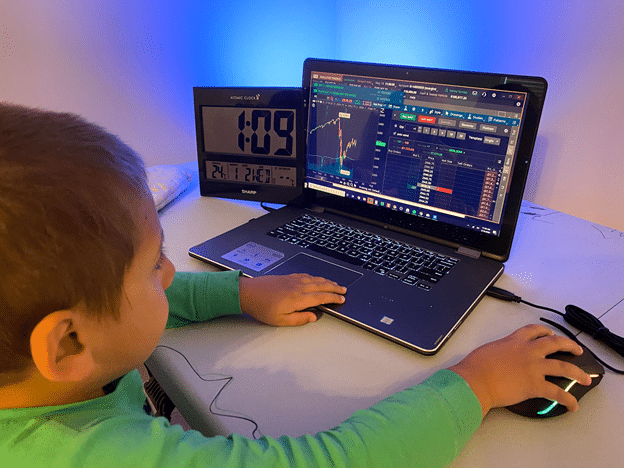 This isn’t the first time he turned a profit in a simulated account on command.

But there’s a lot we can learn from the way little Nate traded the market. Things that we overlook and take for granted.

For nearly a decade, I labored away at trading, blowing up several accounts along the way.

Most sane people would have bailed.

…But traders aren’t exactly normal, are they?

We’re built from a hearty stock of folk, able to withstand tsunamis of selling and bludgeonings of buying…

…Which is why we fail at the most basic trading commandments.

If you’re a golfer, this will sound familiar (or really in any sport under pressure). You stand over the ball, ready to swing. Before you lift the club, you remember to move your thumb a bit.

Except you almost forget to square your stance. Ok good. But what about the breeze that just picked up? And what about….

Before you know it, a million things are running through your head, and you shank the ball into the trees, never to find it again.

Kids don’t carry around all the baggage we do. For all the knowledge and learning, trading relies on some pretty simple principles.

Little Nate just looks at the chart and goes. If he likes it, he keeps with it. Otherwise, he gets out. A lot of it is feel, but it’s pure.

He doesn’t consider what this last candle meant, or the pickup in volume, or how the VIX is trading. No, he’s just looking at the chart in front of him, enjoying the moment.

I think he gets a kick out of the colors and sounds!

All of us overanalyze things to death. It’s almost a given. And the smarter you are, the harder it is to overcome. The same skills that make us great business people that climb the corporate ladder are the ones that hurt us in trading.

You might be surprised to learn this, but the best traders I know are very Zen about things. Even Jeff Bishop is a pretty laid back guy. I can’t even remember the last time I saw him upset.

A good example are my LottoX trades, which come pretty quickly, especially in this choppy market. I don’t have the luxury of thinking through things for even ten minutes. The trades come, and then they’re gone.

Streamlining my trading to its core components helped. Instead of trying to think of everything possible, I keep narrow decision inputs and go from there.

Focus on the decision

My son doesn’t feel any pressure to make $100 a day or anything of the sort. He’s just living in the moment and making decisions.

Half the time, I just drop some important lines on the chart and let him go at it. 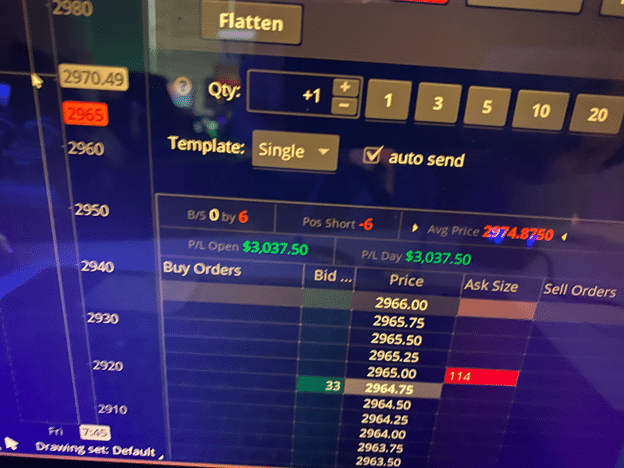 Trading is a giant exercise in probabilities. Some work out, and some won’t. A real strategy is one that’s reproducible and repeatable over and over.

That’s why I emphasize decision making so much. By making the same decisions over and over, you’re creating that type of strategy.

If you’ve read any of my other newsletters, you’ll know I’m an advocate for paper trading until you learn the ropes.

And yet, I’d venture a guess that maybe 5% of the people who read that actually take that advice.

Any fund out there would kill to double every year.

The point is you have plenty of time to learn. Plus, if you’re losing money now, then taking six months off to just do paper trading will actually put you ahead.

Don’t take everything so seriously

Trading is hard enough as it is. But when you’re learning, paper accounts don’t pay the bills.

So, why not give yourself a little treat for the work you do?

It doesn’t have to be anything fancy. A $10 gift on Amazon for a week’s worth of perfect decision making seems reasonable.

Trading needs to be enjoyable. Otherwise, it becomes a burden that drives you mad.

Finding enough trades to practice with can be a challenge. I know from personal experience.

That’s why I created the LottoX service. Every day, I stream my LottoX trades that last anywhere from hours to a few days. And in this market, there’s a bevy of them around.