Key Learnings From My 2662% TTD Winner

Reading that headline you would think I bought options prior to earnings.

In fact, I bought these AFTER numbers hit the street.

And I want to break down this beautiful LottoX trade for you all. 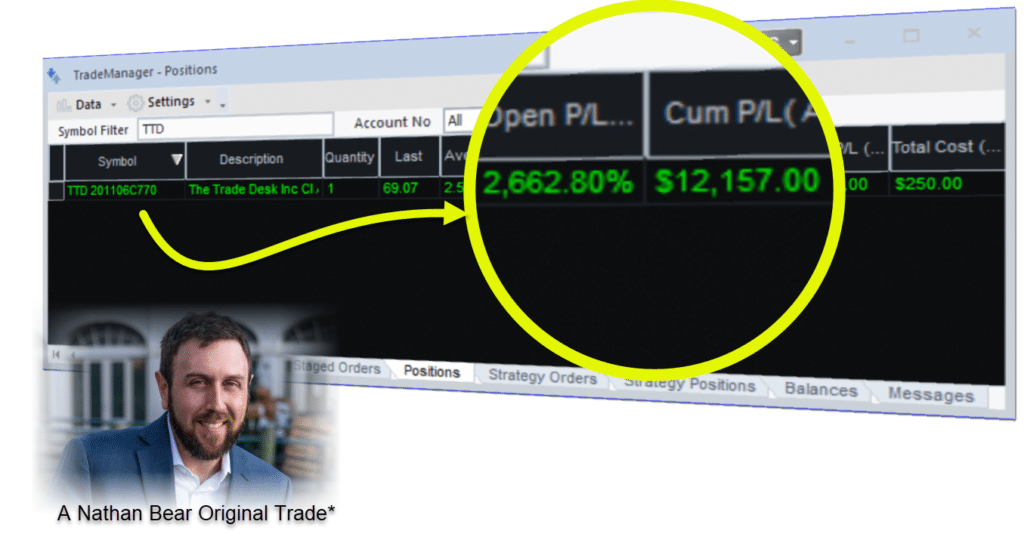 What’s cool about this trade is the relative simplicity behind the idea.

The setup itself is pretty straightforward.

But here’s the catch – it’s high-risk/high-reward.

In fact, these trades tend to bust more often than they pay out.

Which is why risk management is crucial.

I know you’re probably skeptical, and I get it…I would be too.

Give me five minutes to lay out the trade and you can decide for yourself whether you like the idea or not.

Let me start by explaining the short-squeeze, or in this case what’s known as a gamma squeeze.

When traders bet against a stock, they borrow shares from their broker to sell short on margin. They profit as the stock declines and lose money as it rises.

If a stock increases too much, the broker forces them to close the trade to stem the bleeding. They buy back shares to exit the position. This drives up price, causing more traders who were short to buy to close their positions, creating a cascade of buying.

Similarly, many traders will buy call options right before earnings, betting on a big move.

Market-makers take the opposite side of that trade selling these options. As they sell call options, they hedge by buying shares of the stock. The further in-the- money the call options, the more stock they have to buy.

When a stock gaps up huge in the morning, call options that were far out-of-the-money are now in-the-money. and market makers who sold these need to buy a lot of stock to offset their positions.

This is what’s known as a gamma squeeze.

It’s the crux of my LottoX 10X trades.

Not every gap warrants hedging.

What I want to see AR gaps where the stock opens approximately two times the implied move based on earnings.

Now, you’re probably wondering how do I get the implied move.

let me show you.

Go to an option chain for the stock right before earnings. Look up the price of the straddle for the nearest expiration date. Preferably, I want options that expire that immediate Friday.

A straddle is the price of both a call and a put at the money.

The house of mouse reports earnings in six days. These options expire in seven, so they’re the closest expiration.

Normally, I would wait until the night before at the close to get the straddle price, but we’ll use this as an example.

The price of the call and put option put together is $6.80.

If this was earnings night and the stock gaps up ~$12 or more, that would be enough of a move for a potential gamma squeeze.

This part is a little bit tricky.

You see, when the stock opens up first thing in the morning, I have no idea what the options will cost or how much the stock will move.

All I can do is make an educated guess.

Using chart analysis tools, I look at where I might expect the stock to go using techniques such as symmetry, Fibonacci extensions, or whatever works.

From there, I select the nearest strike contracts and either the current week’s expiration or the following one.

Then, I decide how much I want to risk for the trade.

The stock was so expensive, I wanted to go with something that wouldn’t cost me a fortune.

In this case, because I went so far out-of-the-money, I decided to buy the expirations for the following week.

If I’m playing a stock that’s much cheaper, say $50, then I’m fine going with current week expirations that are closer to at-the-money simply because they’re cheaper.

Now, earnings aren’t quite over yet, which means there’s still time to get in on these spectacular trade ideas.