Some of the best risk-to-reward option strategies…

Are ones you are probably aren’t even aware of…

I’m referring to returns of 5-to-1 or better… 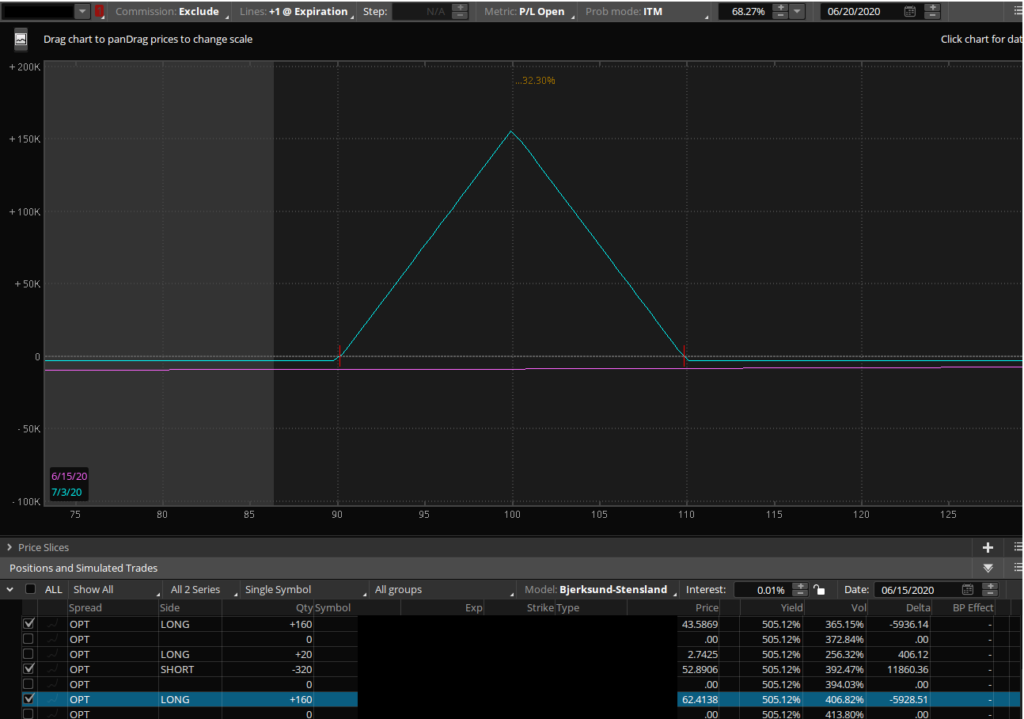 …And I currently have one in my Weekly Money Multiplier Service.

While the name of the strategy may sound silly…

Believe me, the returns you can get on these types of trades can be staggering.

If you’re not familiar with butterfly trades, I’m going to break them down into simple steps you can follow.

All butterflies start with three strikes that have the same expiration.

The basic payout graph of a butterfly trade looks like this: 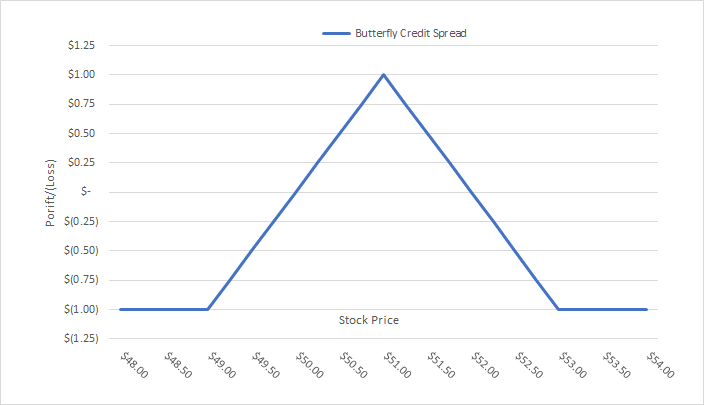 In this example, the strikes would be $49, $51, and $53. You can create unbalanced butterfly trades, but I wouldn’t recommend it for newer traders.

When you execute a butterfly trade, you buy the same number of option contracts on the outer two strikes and sell twice that amount on the middle strike.

When I put on this trade, I pay a small fee to initiate it.

Now, my goal is to get the stock to land at the middle price at expiration. That’s where I get the maximum payout

The maximum profit I get is equal to the difference between either of the edge strike of the trade and the middle strike less the premium I pay up front.

Why most people fail

Let’s start with the obvious – this is a low probability trade. It pays out a ton because it doesn’t win that often.

However, I know a few tricks of the trade to increase the odds of success and payout.

First things first. I never hold this trade straight through expiration. The chances it actually pins to the price I’m looking for is super small.

Instead, I look to take a portion of my profits on the day of expiration.

Rarely can I ever do it beforehand. This is caused by the premium decay.

Once those two things get sucked out of the trade, then I get a shot at making money. However, I need to have nearly all of it pulled out for the trade to turn a profit.

So, how do I accomplish this and get the trade timing and price to line up?

First, I pick out a key support or resistance level that I expect the stock to trade to. This becomes the midpoint of the trade.

Next, I usually go out one to two weeks based on the chart timeframe I’m looking at. While I can’t really predict where a stock might be in three months, I do a decent job of figuring out where it might go in the next 14 days.

After that, two things matter for getting the trade on the cheap: implied volatility and distance to the strikes.

The higher the implied volatility or the distance to the strikes, the less I’ll pay for the trade up front. If I can get a stock where it has unnecessarily high implied volatility that should decline by expiration, all the better!

Now, if I want a stock to trade up to a price, I go with a call butterfly – down I use a put butterfly.

As I stated earlier, my goal isn’t to try to make maximum profit. Instead, I want to try to take a portion of the trade off at 2x-3x the initial cost. The rest I try to let ride a little longer.

Profits increase throughout the day on the Friday of expiration, assuming you’re at the midpoint. However, it’s extremely unlikely it lands right on that price.

But, if you set up the trade with the trend, you increase the odds that you’ll cross over the midprice at some point on the expiration Friday, or at least over the outer strikes.

That’s when I take my profits.

If it happens first thing in the morning, so be it. Obviously, the later in the day the better.

So what will happen with my potential $150K winner?

That, my friends, is reserved for Weekly Money Multiplier members.

But don’t worry, there’s still time to get in on the action.