The way I read news headlines is bananas..,but it works

One tweet sent the market into a tailspin Tuesday, costing me $34,000!

I know some traders stared at their screens in confusion.

But I knew exactly what to do.

You see I live by a set of rules that tell me how to deal with unexpected events.

Don’t worry if you don’t have any yourself. I’m going to share mine with you.

Because the way I read headlines isn’t like anything you’ve ever heard.

Many of my newer LottoX members use the headlines to read the charts.

Know what I do?

I use the charts to read the headlines!

It sounds insane, but hear me out.

Let’s start with an example from the Tuesday market plunge and I’ll explain everything.

I want to start by comparing two different trades that I had on at the time of the tweet: Zoom (ZM) and Overstock (OSTK).

While both are momentum names, they operate in fairly different businesses.

In both cases I used my TPS setup.

My TPS setup consists of three components: a strong uptrend, consolidation chart pattern, and a squeeze.

In the charts below, the blue arrows highlight the uptrend. With both stocks, we saw a strong push higher off a lot of buying.

Black trendlines connect the highs and lows of the candlesticks to draw out the consolidation patterns. TPS setups rely on the trendlines converging, telling me that price is trading in a narrower range.

Lastly, the orange boxes at the bottom identify my timing indicator – the squeeze.

This occurs when the Bollinger Band indicator moves inside of the Keltner channel, turning the dots red.

When the dots turn green, the squeeze ‘has fired’ and the trade is over. 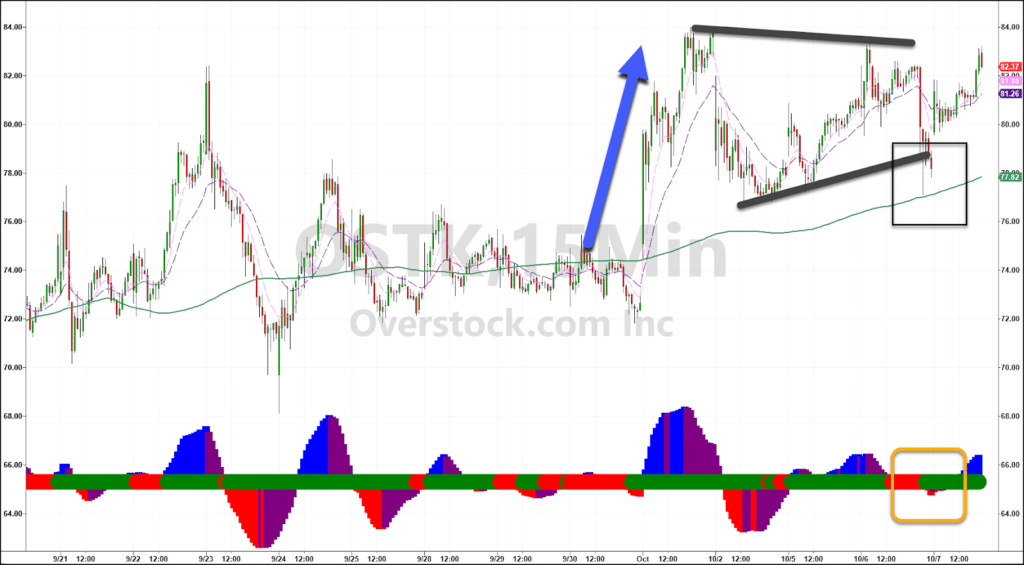 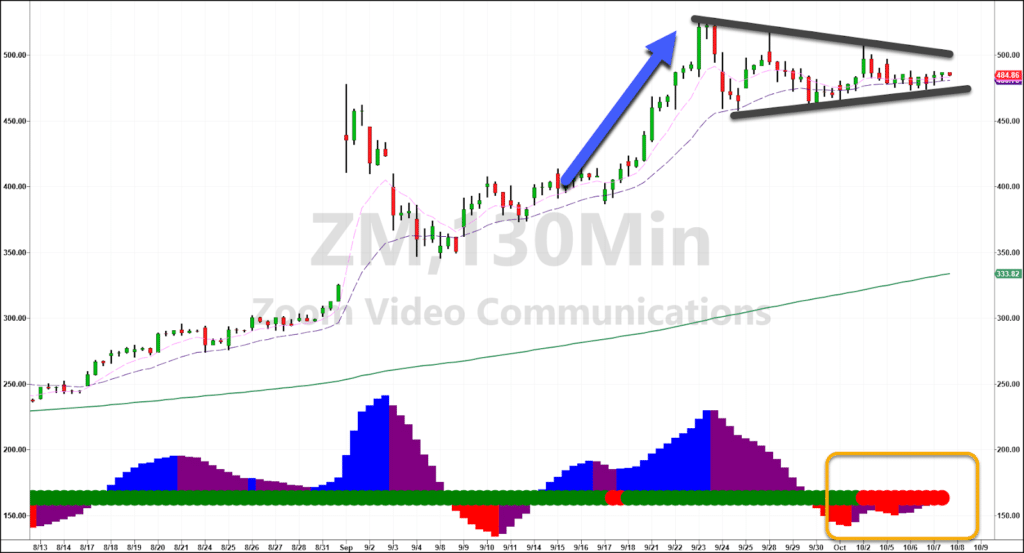 Hopefully, you can immediately spot the difference between the two.

In the ZM chart, the squeeze remained active and the chart pattern intact.

With OSTK, price broke the lower trendline as the squeeze fired. That meant the trade was over.

Now, smaller timeframe trades have a tendency to get tossed around by headlines more than ones with longer timeframes.

That’s why I adjust my risk accordingly.

For right now, and most of the last decade, there is one thing that’s driven the market more than any other – The Federal Reserve.

So, if you take nothing else away from this, let it be this one piece of information…

Now that we’ve got that settled, let’s try to put the tweet into context.

Political tweets, while unexpected, aren’t atypical this day and age.

So, while they move the markets a good amount, stocks stayed within their normal trading ranges and didn’t crash.

However, that doesn’t mean there wasn’t any damage done.

You see, no matter the size of the event, once technical damage is done, the algos change the way they trade.

For example, take a look at the daily chart of the SPY. 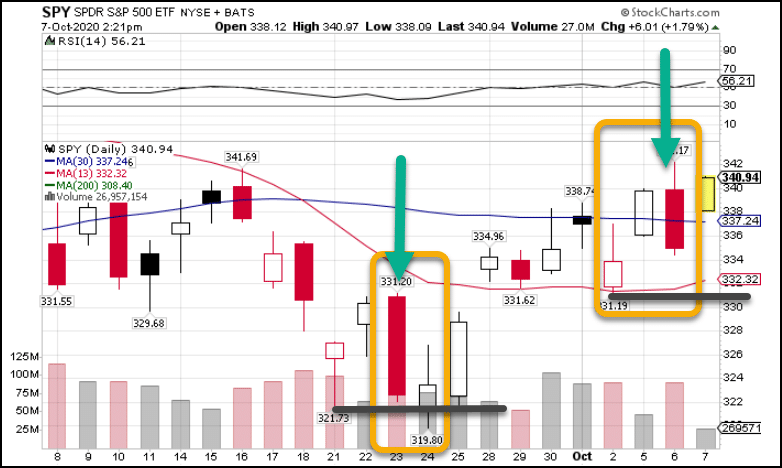 The orange box on the right shows the recent down candle caused by the tweet. I also highlighted another large down candle from the end of September.

In both cases, neither one closed below the recent lows, which would have caused technical damage.

Even though some ‘events’ might not be a big deal, if the market just needs a little shove, then it can provide the momentum.

So, when I evaluate news events, it’s not necessarily on the quality of the news story itself. Rather, I look at how the markets reacted and the charts look afterward.

Sometimes, headlines are specific to a stock and the way its shares trade.

For example, the announcement of a stock split in Apple and Tesla led to huge runs for both companies, ones I took full advantage of in my LottoX swing trades.

When Draftkings (DKNG) announced a secondary offering of shares (adding more shares to the marketplace for trading), that sent price plummeting.

These are what I call technical trading events, and they matter to the stock.

You can’t really plan for them in advance. But, in some cases, like with the stock splits in Apple and Tesla, you can use them to create lucrative trade ideas.

One place to find headlines for tradeable ideas is earnings season.

They take a little finesse and skill.

That’s why I walk my LottoX members through the steps, showing them which stocks work best and why.

Plus, they get to see me take the trades in real-time.

Care to join the fun?