Use Bollinger Bands to Up Your Trading

Sometimes I wish I had a crystal ball that could show me the future…tell me which trades to pick and which ones to avoid.

And I owe it all to some nerdy mathematicians.

At first, I resisted the notion that math played an important role in the markets. Now I’m fully on-board, and you should be too.

That’s why I want to introduce you to my favorite mathematical tool – Bollinger Bands.

Of all the indicators out there, this is possibly the single most useful for any trader regardless of their strategy.

It gives you a look at the statistical window—an expected range in which a stock is expected to trade within.

As mysterious as it sounds— It isn’t.

I want to explain to you how I use it to identify oversold and overbought conditions, as well as enter trades.

This is truly a game-changer, and I’m excited to share it with you.

What are Bollinger Bands

Bollinger Bands were originally developed by John Bollinger. They measure a range of two standard deviations from an average based on a certain time period.

If you look back at the historical movement of a stock you can figure out the high, low, and the average that the stock traded. standard deviation is a statistical measure that says – based on a defined period, 68.2% of the time (one standard deviation) a stock should fall within this range.

Two standard deviations say that a stock’s price should fall within the range 95% of the time. The midpoint of that range is the simple moving average.

It all works based on a distribution bell curve you might have seen in math class. 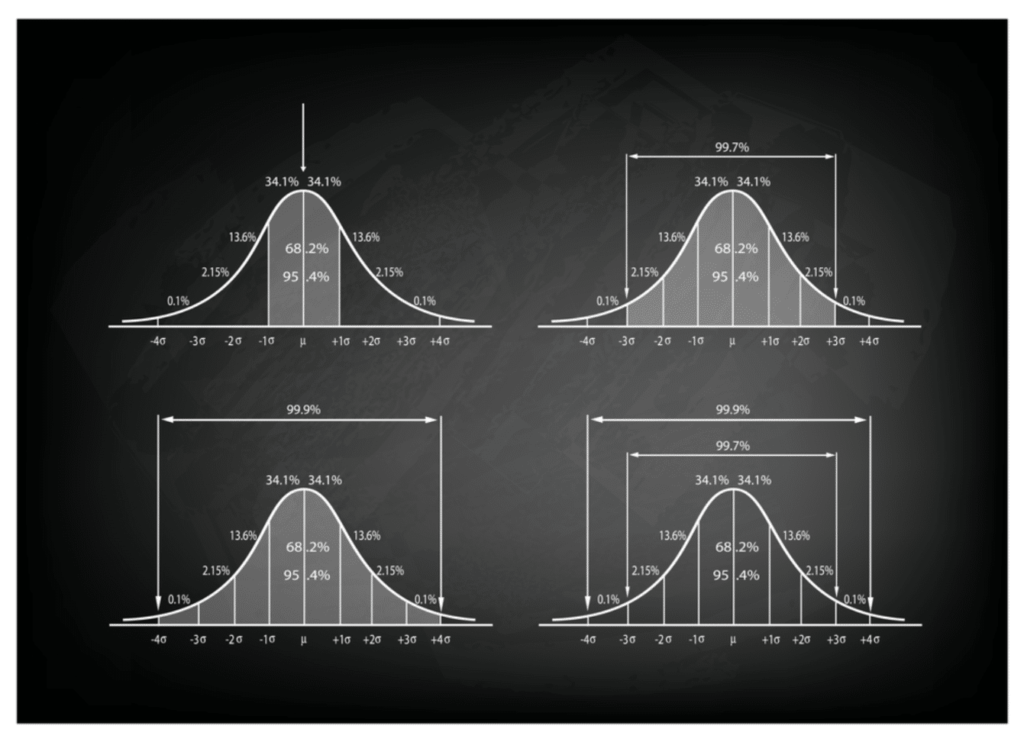 This is a normal distribution curve. The funky symbol represents standard deviations.

So, will a stock always fall within a Bollinger Band? No. It should only fall within two standard deviations 95% if the time.

Here’s a look at the chart for ROKU (ROKU) based on a 20-period time frame on the daily chart with two standard deviations. 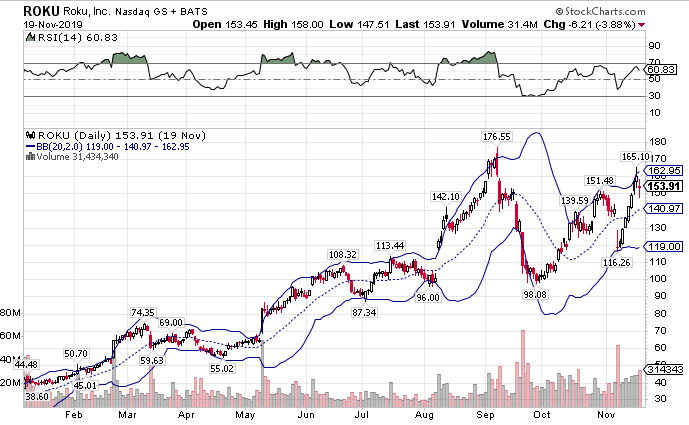 The cool thing is these bands adjust based on recent history. Most traders use the default settings of a 20-period simple moving average and two standard deviations based on closing prices.

How to use them for trade entries and exits

I love to use this indicator to identify price compression after a big move. As the bands get tighter and tighter, it indicates price squeezing together. This generally leads to an explosive move.

My actual squeeze indicator looks for the Bollinger Bands to trade inside of another indicator known as the Keltner Channel. However, all it identifies are areas where price is trading in a narrower range.

Now, I combine that with my other two components, a clear trend and a chart pattern to form my TPS setup. Then, I use the Bollinger Bands as gateways for the trade. Oftentimes, I’ll set my stops as a noticeable close below the lower Bollinger Band.

Here’s an example of how I used it with Tesla (TSLA) recently. The hourly chart created a nice continuation pattern off a clear uptrend. 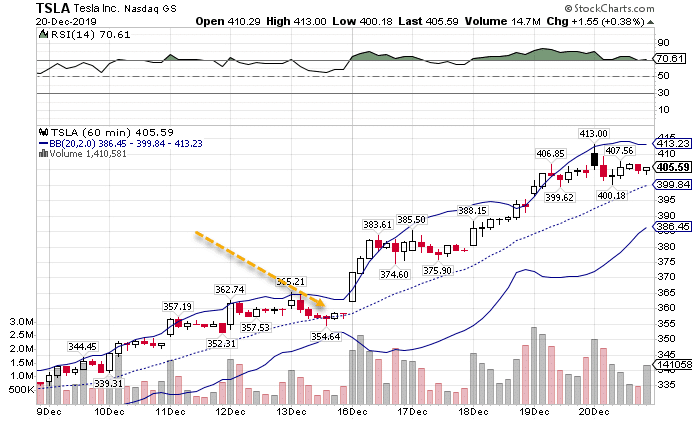 The stock demonstrated a strong uptrend off earnings that continued to consolidate and edge higher each day. You can actually see the little stair-step move it kept making each day (a really common occurrence for bullish charts).

I entered the trade close to the midpoint of the Bollinger Band. This would set my stop as a close below the lower band. 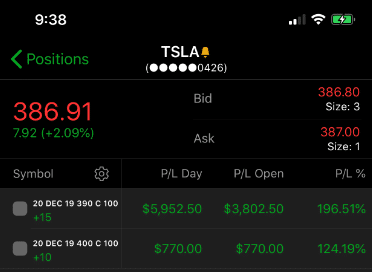 The stock did what I suspected and shot up the next day, leaving me with a healthy profit to end the year.

Here are a few other tips for using Bollinger Bands –

Bollinger Bands work best in conjunction with other indicators

Like any trading tool, Bollinger Bands don’t work well by themselves. I use them with a combination of exponential moving averages and other insights I developed over the years.

However, my key to all of this is my TPS setup and my trade journal. You can learn more about these in my webinar I have coming up.