How I Netflix & Killed This Week

While a lot of buy-and-hold stock traders ran for the hills this week, my premium Weekly Windfalls subscribers were snapping necks & cashing checks.

In fact, I made wicked profits on a handful of Windfalls trades, all in a matter of days (and some even less than that), like this… 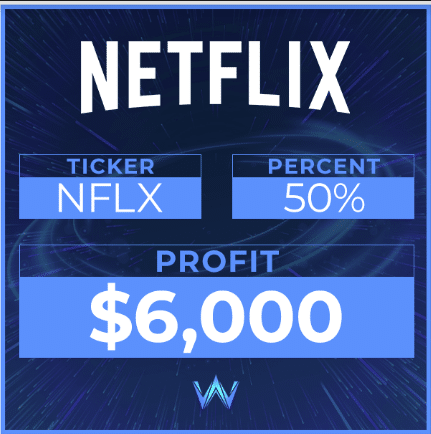 And do you know why?

As I told you earlier this week, it’s all about CAPITALIZING ON FEAR.

See, when the rest of the market is anxious, THAT’s the time to strike with the “casino strategy” I use in Weekly Windfalls.

That’s because option prices climb a hill of “anxiety premium,” and since we’re option sellers, not buyers, we’re basically just kicking back and collecting cash while the rest of Wall Street panics about the coronavirus.

What’s more, being smack-dab in the middle of earnings season only makes us MORE money.

So, if you’re still on the fence about jumping into the options game — trust me, I get it.

But if ever there was a time to finally take the plunge, it’s now.

First, a refresher course on implied volatility (IV), which is one of the key components of an option’s price.

In the simplest terms, IV reflects the market’s expectations for a stock’s volatility over a certain period of time.

See, when traders expect a stock to be volatile, they’re willing to pay more to buy those options.

That’s because compared to options on a relatively predictable stock, the options on a volatile stock have a better chance of moving into the money (ITM) by expiration, because the shares could make a monster move.

Think about it for a minute.

If you had to bet on a drag race, are you putting more money on the sports car that could win (i.e. – move ITM)… or your dad’s slow-and-steady Buick?

The Buicks are for buy-and-hold stock traders. 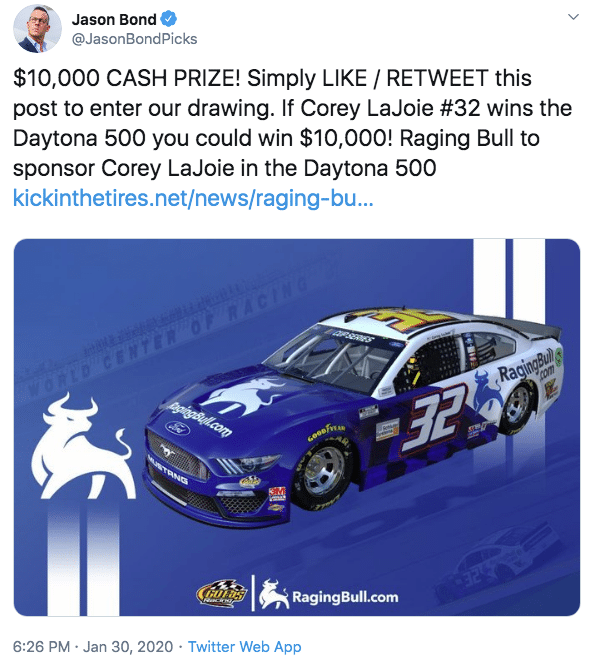 Speaking of races… RagingBull is in the Daytona 500, baby!!
LIKE or RETWEET me and you could WIN A $10K CASH PRIZE!

The VIX and Why It Matters

Now that you remember what IV is, let me introduce you to the Cboe Volatility Index (VIX), if you’re not already acquainted.

The VIX is often called the “fear index” of Wall Street.

That’s because it reflects short-term volatility expectations for the S&P 500 Index (SPX), which is the major stock market index in the U.S. (along with the Dow and Nasdaq).

So, a rising VIX means rising volatility expectations for stocks, which you’ll see a lot when traders are nervous (hence the “fear index” nickname).

And investors tend to get nervous when stocks get a little rocky, like right now — which often results in a spiking VIX and lower SPX.

Just take a look at the chart below, with the VIX on top and S&P 500 on the bottom: 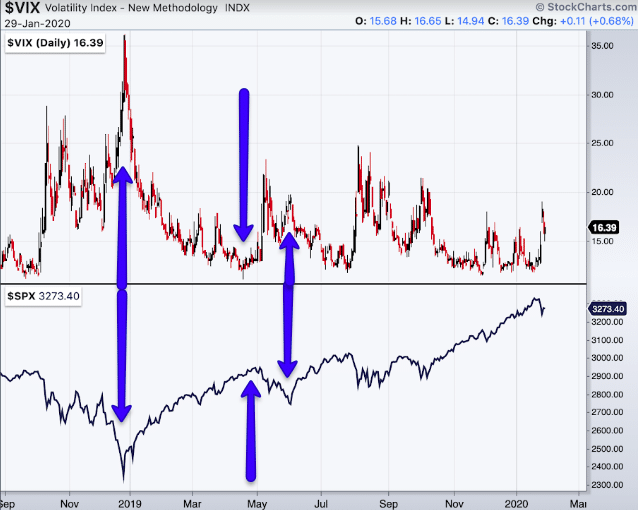 You can see how the VIX skyrocketed in late 2018, as stock prices cratered. Then how the VIX fell as stocks rallied in early 2019.

Zooming in on recent price action, you can see how the VIX jumped to its highest level since October recently, as the S&P took a break from hitting all-time highs. 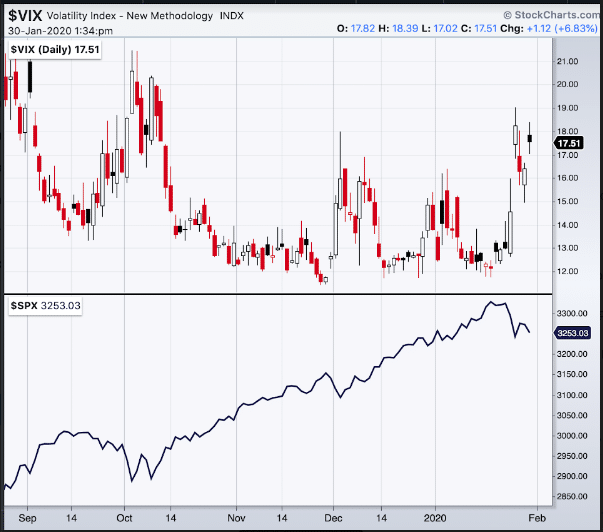 As I hinted at earlier, not only are Weekly Windfalls members cashing in big on “anxiety premium” — earnings season also helps us collect cash.

When a company has an event on the calendar like earnings, traders will bid up those option premiums ahead of time.

That’s because earnings releases have the ability to send a stock skyrocketing or nosediving, so buyers are willing to pay hefty premiums for pre-earnings options (remember the race car analogy).

Just take a look at a couple of the major earnings reactions we saw yesterday: 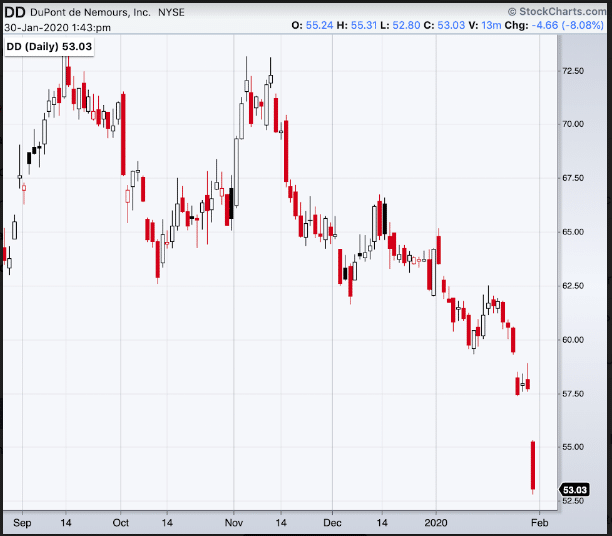 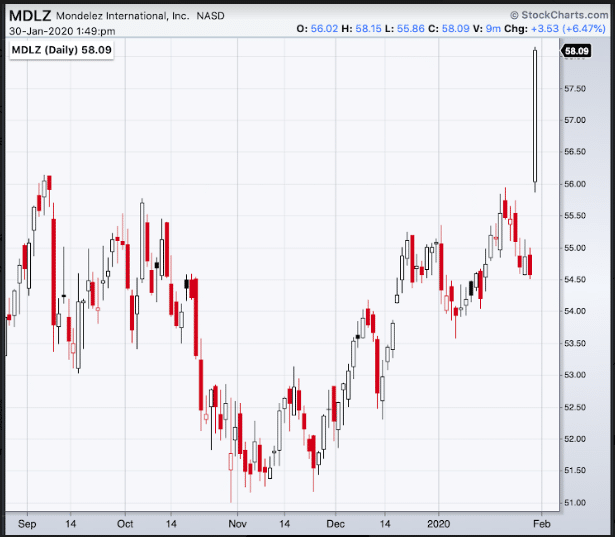 That’s what option buyers are looking for.

After the reports, options on those stocks suffer what’s known as a “volatility crush,” with prices basically cratering back down to earth as demand implodes.

Why You Can’t Beat This Strategy Right Now

So, guys and gals, what does all this mean?

Well, because I trade credit spreads — meaning the premium I receive for my sold option exceeds what I have to pay for my bought option — I’m considered a seller.

And as with anything, if you’re a seller, you want to get as much money for your goods as possible.

I mean, we were already at an advantage over option buyers by default, considering nearly three-quarters of option trades resolve in the sellers’ favor.

They call it the “casino strategy” because of its high win rate, and that’s because you can make money if the stock:

But now… the stars are even more aligned.

‘Cause the current market environment — plagued by coronavirus fears, rife with uncertainty about earnings and the economy, and subsequently chock-full of inflated option premiums — has me champing at the bit.

Let me give you some examples as to why NOW is the time to follow my Weekly Windfalls trades.

I made about $12,000 on just THREE credit spreads earlier this week — all in a matter of just a FEW TRADING HOURS.

Had I taken a different route to bet bullishly, purchasing call options instead, I might be kicking rocks.

Just to break even on a call purchase, you need the stock to make a big swing higher.

Specifically, breakeven on a long call is the strike + the cost to buy the option.

And when option prices are running hot, those breakeven levels get even higher.

Just take a look when we compare the numbers on our TGT, NFLX, and DIS credit spreads vs. if we’d bought calls on those stocks (using the ask prices) on Monday, Jan. 27. 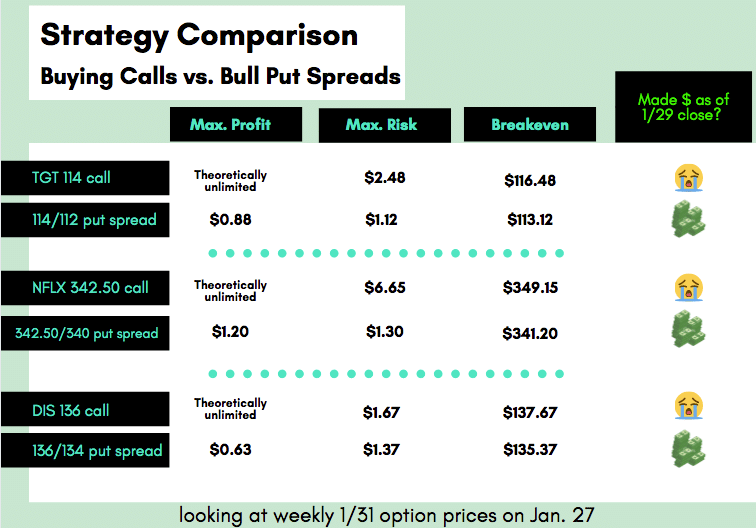 As you can see, not ONE of those stocks would’ve been above the breakeven price of the respective call purchases, using Wednesday’s closing prices!

Not only that, but had we purchased those weekly calls instead of implementing the credit spreads, our maximum risk would’ve been a heck of a lot higher.

I mean, the maximum risk on the TGT call is MORE THAN DOUBLE that of the bull put spread, and in the case of NFLX… nearly TRIPLE.

Meanwhile, here I am just CASHING IN: 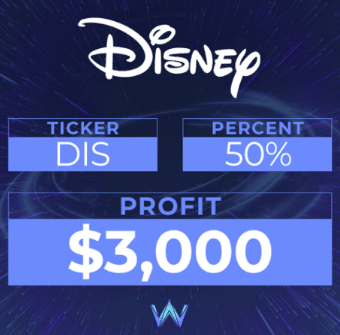 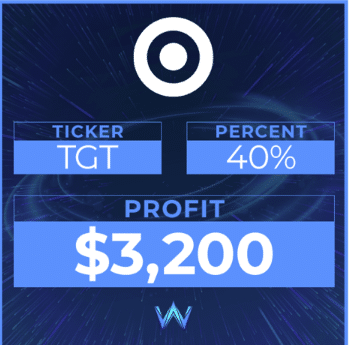 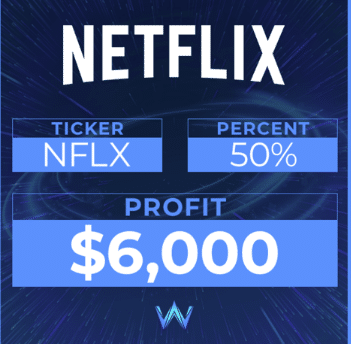 If that doesn’t tell you all you need to know, I don’t know what will.

In closing, guys and gals — I can’t think of a much better time to be a seller. I hope you’ll join me — I’d hate for you to miss out on the next big Windfall alert.