The Market’s Rollercoaster Ride Will Test You

Last week the market took a hit, as coronavirus fears sent the Dow to its worst single-session loss since August on Friday.

But while stocks in China reopened from the Lunar New Year with a massive sell-off, the rollercoaster ride continued for U.S. stocks, which were once again higher yesterday.

While the broad-market fear inflated option premiums across the board last week, resulting in several big-league winners for my Weekly Windfalls subscribers, not all of my trades were dubs.

In fact, I found myself assigned shares at one point.

Now, as most of you know, I was a teacher and a coach before I changed my life — trading small-cap stocks and options — and I’ve carried that mentality with me to Wall Street.

As such, I like to use both my wins and losses as learning experiences, and my goal here is to educate and prepare you for entering the world of options trading.

That said, I’d like to assuage some general fears about getting assigned when trading credit spreads.

What does it mean to be assigned shares?

When you sell calls and get assigned, it’s your obligation to deliver the underlying shares at the strike price if the buyer exercises the option.

If you’re a seller of puts and get assigned, it’s your obligation to BUY the shares at the strike price if the buyer exercises the option.

Your odds of getting assigned increase the closer you get to expiration AND the deeper into the money (ITM) your sold option is.

Before you freak out, a couple of things to remember:

That said, here’s what happened to a trade I put on Alibaba (BABA) last week.

I opened the trade by selling weekly 1/31 220-strike puts, on expectations that BABA would find support around $220 last week.

To protect my position and limit my risk — exactly for situations like this — I also bought weekly 1/31 217.50-strike puts.

Now, fast-forward to Friday, Jan. 31, hours before the options were set to expire.

The 220-strike puts were ITM, because BABA shares were trading below $220.

I then received a notice from TD Ameritrade that 25 of the 100 220-strike puts I sold were assigned.

To the untrained eye, this could’ve caused a panic.

To start, I got a margin call notice:

As I told my paid Weekly Windfalls members last week, a beginner would see the note from their broker and possibly panic, for three reasons:

But I’m here to walk you through everything, and explain why it’s not even CLOSE to being as bad as it seems on paper.

Part of the beauty of a credit spread is the LIMITED RISK.

Now, had I ONLY sold that 220-strike put, I might be in the fetal position now.

That’s because I would’ve been considered a “naked” seller — meaning VERY exposed to DEEP risk. And that’s not my jam.

But the whole reason I bought the 217.50-strike put to pair with my sold option is to limit my losses in the event that BABA kept moving lower.

Step 3: Get Some EXERCISE

When I woke to the assignment, I simply called TD Ameritrade and asked them to exercise 25 of the 217.50-strike puts I purchased as part of my BABA spread.

You should also be able to do this online: 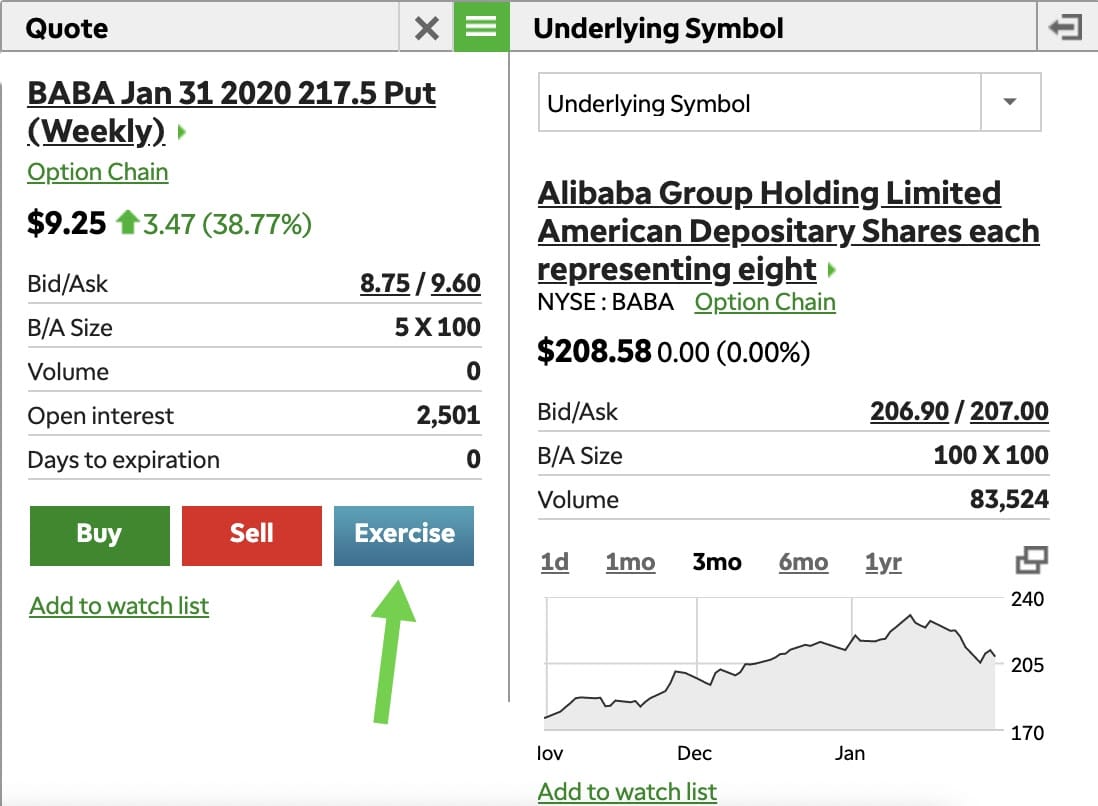 Remember — when a put option is exercised by the buyer (me, in this case), the seller has to deliver 100 shares of the stock for the strike price.

So, I essentially turned around and sold the BABA shares.

My BABA trade did result in a loss of a few thousand dollars, since the spread wasn’t working to begin with, but it wasn’t anywhere near as severe as it might’ve seemed on paper.

Other Ways to Deal

So, if you remain bullish toward a stock on which you get assigned, you could also consider just holding on to the shares.

You’ll still have the long put until options expire, too, which essentially just acts like a protective put on the shares you own.

That means if the stock continues to fall within the put’s lifetime, you can see Step 3 above and exercise it.

The protective put essentially locks in a minimum selling price (the strike) for you, no matter how far the stock may fall.

So, in the instance of my BABA trade (and assuming my bought puts didn’t just expire on Friday), I could’ve held the shares and only exercised the put if they went below the $217.50 strike price.

Holding onto the shares would also save you some brokerage fees.

But really it depends on your specific outlook for that stock, and how comfortable you are.

In closing, guys and gals, I use vertical spreads because they are a SAFE WAY TO SELL OPTIONS,

I never sell options naked or mess with ratio spreads in Weekly Windfalls.

And while getting assigned is very uncommon, the more you trade and get comfortable speculating with options, the more likely it’ll happen to you at some point in your trading career.