When a trader buys a put option contract, they buy the chance to create a short-sale of a stock at the strike price. This short-sale opportunity will only be available until the option expires. Selling short allows a trader to profit when stocks go down.

A put option contract gives a trader the right to take that chance to sell short if they want, or to let the contract expire. As with call option traders, most put option traders attempt to benefit from the change in value of the option. Let’s take a closer look at how that happens.

Suppose a trader buys a put option on XYZ stock with a strike price of $98. Let’s also suppose that at the time of purchase, the option has 30 days left until it expires. The setup might look something like this: 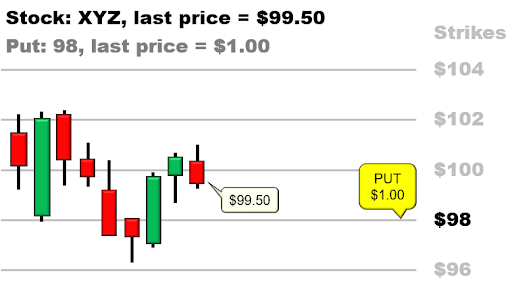 At the moment this chart depicts, the 98 put option contract can be purchased for a price of $1.00 per share. This implies that the trader would spend $100 dollars to buy the contract because the contract includes the chance to sell short 100 shares of XYZ. Put traders may choose to buy an option with a strike price below the current price of the stock because they know that there is a chance the price might go lower. If they buy the put option contract now, they can benefit from this move. They look for a stock they believe could move significantly lower within the option contract’s window of time.

A put option trader hopes for a drop in stock value. Consider this scenario where the put option buyer has the chance to sell short 100 XYZ shares at $98 when the stock first falls to that price. Since the original cost of the option was only $1.00, the trader would have only had to spend $100 to purchase the option. Now as the stock price has drifted lower to $98, the value of that put option has increased by more than double. 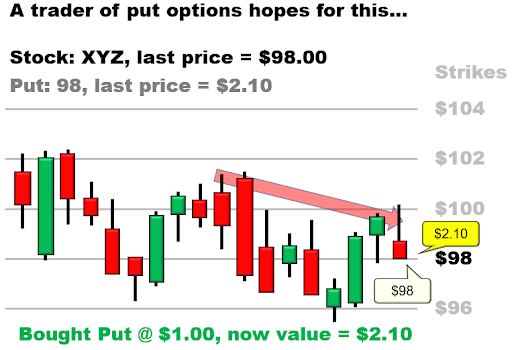 The put option buyer now has two alternatives. The first alternative is the chance to exercise their right to sell the stock short at $98 per share. But in doing so, they give up the value of the option. This creates a net loss of $100 at that moment, but they wouldn’t have to worry about the expiration date of the option contract. This would allow them to hold onto the short position as long as they like.

The second alternative is to simply sell the put option, and benefit from the increased value of the contract. That would create a net profit of $110 before commissions. However, most put option traders hope for a stronger down move. Here is what that might look like. 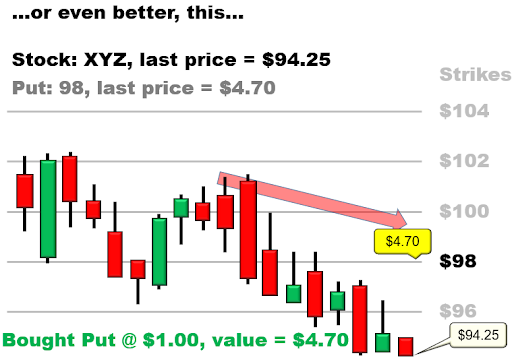 Notice in the chart above, the put option price is depicted as being $4.70 per share after the share price moves down to $94.25. The move of the stock is the biggest influence on the price because a stronger move lower means the option value increases more dramatically. If the put option buyer simply sells the option now (rather than exercising it) they give someone else the chance to sell XYZ short at $98 and they receive $470 for doing so. That means the net profit from the trade is $370. This outcome, or something even better, is what every put option buyer hopes for.

But option traders must be aware of the risks they take and the stock can move in any direction including unfavorable ones. In this example let’s consider what would happen to the put option if the share price rose instead of falling.

If XYZ traded as high as $103 per share two weeks later, it could create a scenario where the price of the put option falls dramatically. In that scenario the put option might be priced as low as $.40, losing more than half its value.

The trader can still take the chance of selling short the stock at $98, but doing so would put them in a position of losing $5.00 per share at the outset. Even though the put option has lost value at this point in the trade, it is worthwhile to consider the alternative. The value of the option has lost only $.60 per share by comparison. This is an example of what makes option contracts attractive to some traders. In this scenario, even though they lose a larger percentage of the money they spent on the trade, their loss is a smaller net amount than they might have lost from making a short sale trade. 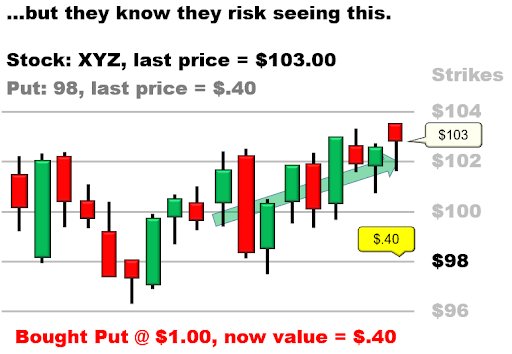 When a put option trade doesn’t work out like we hope it will, it happens because the price of the stock moves higher.

The value of a put option increases when the price of the stock drops and decreases when the stock price rises. Put options give the buyer the chance to sell a stock short at a set price, but the buyer doesn’t need to take that chance unless the stock’s move makes it favorable for them to do so. These examples demonstrate how a put option contract can both capture benefit and limit risk depending on the movement of the underlying stock.

Buying put options offers a way to capture the opportunity behind a downward move in a stock price, while maintaining a limited amount of risk. A common way to depict this relationship is through the use of a risk profile graph. 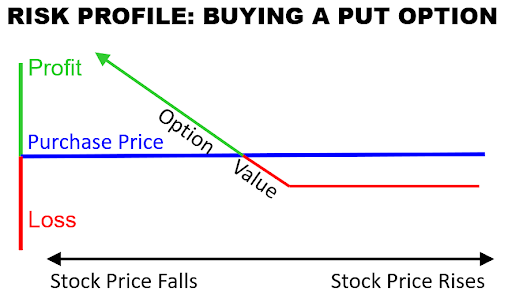 In summary, buying a put option allows the trader a chance of shorting a stock if they choose to do so. The cost for having that chance is the price of the option. If the stock moves favorably, they can benefit by exercising the option or by selling the option to someone else. If the stock moves unfavorably, they will lose some or all of the money they used to purchase the option, but their risk is limited to that amount of loss.

Once a trader understands the basics behind how buying options works, it becomes important to see the opposite approach to options–that of being an option seller. The next part of the Beginner’s Guide discusses the two opposing approaches to option trading: buying and selling.

Part 1: What is Stock Option Trading?

Part 3: Call Options: A Chance to Own Stock. 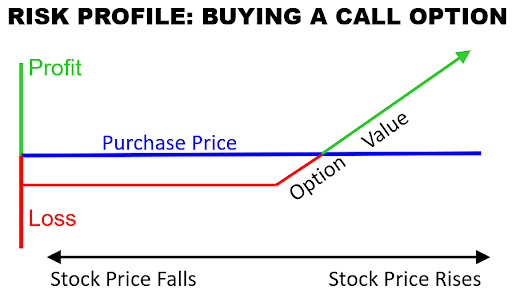