In 2021 I set out to stretch my beliefs about what I was capable of as a trader from a performance perspective. The very first thing I did was highlight the beginning of Seth Godin’s book, The Icarus Deception.

Just south of the Greek island of Samos lies the Icarian Sea. Legend has it that this is where Icarus died–a victim of his hubris. His father, Daedalus, was a master craftsman. Banished to prison for sabotaging the work of King Minos (captor of the Minotaur), Daedalus created a brilliant escape plot, described in the myth that we were told as children. He fashioned a set of wings for himself and his son. After affixing the wings with wax, they set out to escape. Daedalus warned Icarus not to fly too close to the sun. Entranced by his magical ability to fly, Icarus disobeyed and flew too high. We all know what happened next: The wax melted, and Icarus, the beloved son, lost his wings, tumbled into the sea, and died. 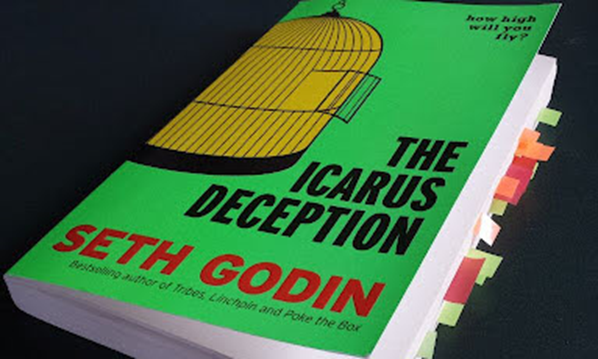 The lesson from this myth: Don’t disobey the king. Don’t disobey your dad. Don’t imagine that you’re better than you are, and most of all, don’t ever believe you have the ability to do what a god might do. The part of the myth you weren’t told: In addition to telling Icarus not to fly too high, Daedalus instructed his son not to fly too low, too close to the sea, because the water would ruin the lift in his wings.

Society has altered the myth, encouraging us to forget the part about the sea, and created a culture where we constantly remind one another about the dangers of standing up, standing out, and making a ruckus. Industrialists have made hubris a cardinal sin but conveniently ignored a far more common failing: settling for too little. It’s far more dangerous to fly too low than too high because it feels safe to fly low. We settle for low expectations and small dreams and guarantee ourselves less than we are capable of. By flying too low, we shortchange not only ourselves but also those who depend on us or might benefit from our work. We’re so obsessed about the risk of shining brightly that we’ve traded in everything that matters to avoid it. The path that’s available to each of us is neither reckless stupidity nor mindless compliance. No, the path that’s available to us is to be human, to do art, and to fly far higher than we’ve been taught is possible. We’ve built a world where it’s possible to fly higher than ever, and the tragedy is that we’ve been seduced into believing that we ought to fly ever lower instead.

I highlighted this to remind myself I’m capable but need to have the right mindset. The great motivational speaker Tony Robbins is big on the power of positive affirmations and incantations because they are said to engage your physiology and emotions whilst you are expressing positive affirmations aloud which can help create neuro-association between what you say and how you feel. See I believe the absolute most important part of trading is trying to master my psychology. Did you know the human brain releases more dopamine (the feel-good chemical) when you pull the slot machine lever compared to actually winning? Why do you think so many traders enter trades without a plan–it “feels good” to push the keys. I’ve stretched my thinking a lot this year and am really proud of myself for doing so. See my trading journal here. But it wasn’t easy and without these 2 book recommendations, there’s absolutely no way I could have figured it out on my own. As you head into 2022, if you too want to challenge your thinking and work on the psychology of trading, I recommend reading the following books: 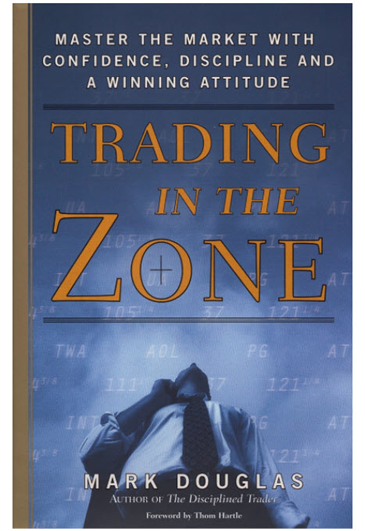 TRADING IN THE ZONE by Mark Douglas (Amazon)

These are by far the best books I’ve ever read about trading and I’m confident you’ll love them as well. And don’t skip the exercise at the end of TRADING IN THE ZONE, it’s a game-changer.

Feel free to leave your comments and questions here.