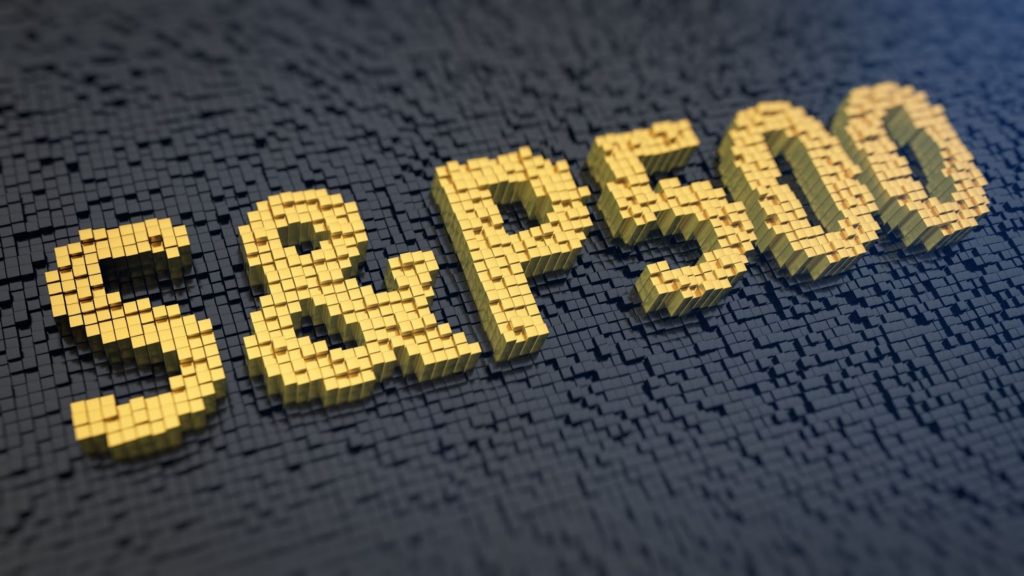 Look under the hood of the broader stock market right now and you’ll see a picture that looks nothing like the major indices that are so often quoted by the financial media.

Sure, you’ve probably heard about the historic underperformance being delivered by small caps in recent weeks.

But have you heard about the battle between cap-weighted and equal-weighted indexes that’s also taking place?

Cap-weighted indexes like the Nasdaq Composite Index, the Dow Jones Industrial Average, and Standard and Poor’s 500 Index are calculated by using a company’s market price and the number of outstanding shares to determine the percentage weighting of the company’s inclusion in the index.

In contrast, equal-weighted indexes are constructed by distributing the same investment amount into each company stock in the same pro-rata amount.

In other words, no matter the company’s size, each company is represented equally within the index.

I’m about to show you the pros and cons to using each strategy as either a trading vehicle (via ETFs, for example) or as a tool for analyzing the markets, and I am going to reveal what each strategy is telling us about the market right now.

How should traders view the differences between cap-weighted and equal-weighted indexes?

There are of course pros and cons to each strategy.

So, which is best?

When it comes to cap-weighted indexes, from a trading perspective, these vehicles largely mock the movement of larger, stronger, more stable companies, offering investors a relatively favorable risk profile.

From a research perspective, these vehicles are more sensitive to the economy, and therefore can be seen as a more reliable window into any signals that the economy might be sending.

On the flipside, however, investors are at risk of missing out on potentially huge gains during those periods when the business cycle favors smaller companies.

In almost the same light, investors risk having poor diversification, and being over exposed to just a few mega-cap companies, if they happen to be overweight these large indexes.

For equal-weighted indexes, the benefits are equal diversification and having more exposure to the small-cap and mid-cap companies that may have a higher growth potential.

At the same time, though smaller companies have a higher risk of failure, there’s no clear distinction of stock size in relation to the economy, and rebalancing may lead to higher stock turn-over rates.

It’s important to understand that the S&P 500 is the cap-weighted index that the financial news outlets love to quote at every opportunity.

The popular vehicle for tracking and trading this index is the S&P 500 ETF (SPY).

Its much lesser-known fraternal twin, the equal-weight S&P 500 that trades via the ETF symbol RSP is almost never mentioned by the financial media.

Again, this is the media we’re talking about, so if it’s not sexy, it’s not worth printing.

Recently, the “mega-cap” stocks have been the main driver of the broad market’s move higher, and this is best represented on the chart directly below, where we see SPY making new highs vs. the struggling RSP. 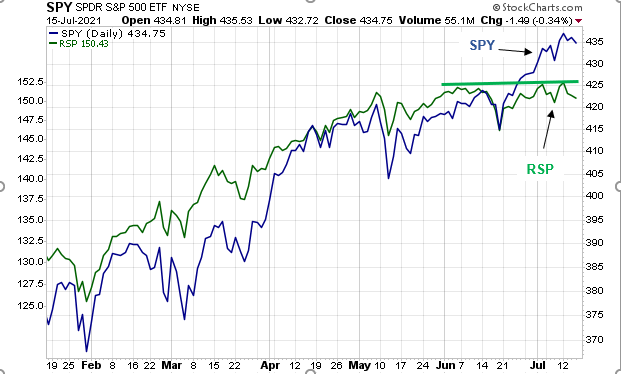 Interestingly, while RSP has been trading sideways for the past couple of months, raising concerns among some Wall Street analysts, it’s actually still slightly ahead of SPY on a year-to-date basis (RSP + 16.9% YTD vs. SPY + 15% YTD).

Recently, though, RSP’s YTD lead over SPY has been declining rapidly since peaking in May/June.

Essentially, RSP has given up nearly all of its 2021 outperformance against SPY over the past two months.

This aggressive underperformance can be seen on the right side of the RSP / SPY ratio chart on the bottom panel of the chart below. 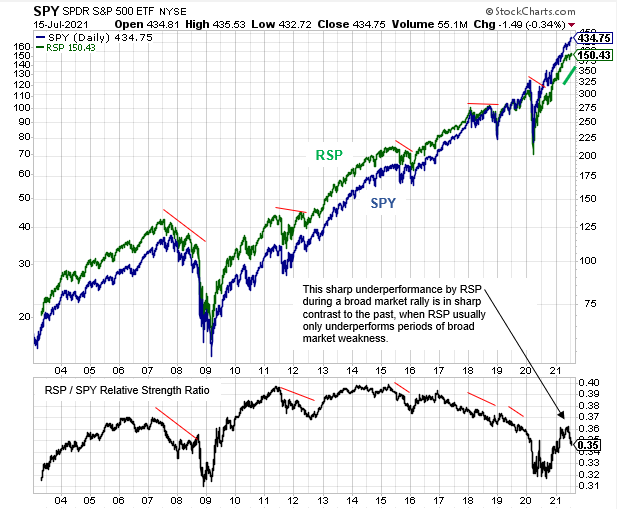 The other noteworthy observation is that RSP usually shows periods of weakness similar to this only during cycles of broad market weakness (see red lines on Figure 2), not when it’s trending near record highs.

Again, when it comes to the broader equity market, it’s important to understand that there’s another world other than the one the financial media forces the untrained to focus on.

Unfortunately, this uncharacteristic weakness during a broad-market rally by the lesser-known equal-weighted S&P 500 (RSP) is sending mixed signals.

Equity market bears say the divergence can be interpreted as a possible early warning sign that the broad market is about to follow and roll over.

At the same time, though, bulls see the recent weakness as healthy rotation that is about to resolve itself in the form of the RSP showing strong leadership over the cap-weighted S&P 500.

Whatever the outcome, it’s probably safe to say that if the bulls are correct, and rotation back toward RSP leadership is about to occur, this rotation probably has to start happening soon. 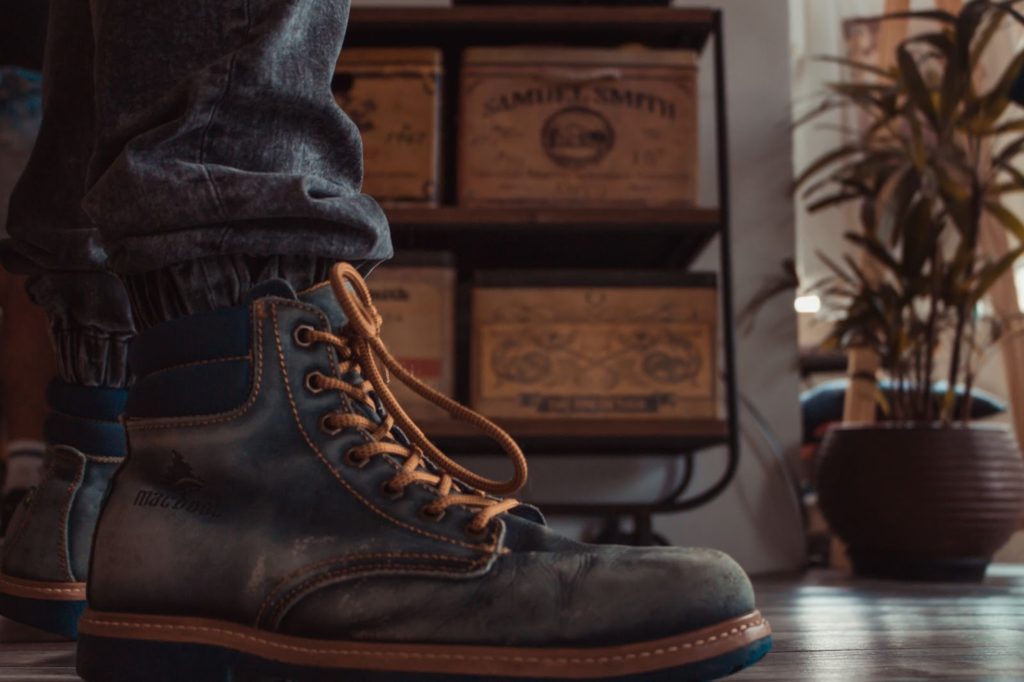 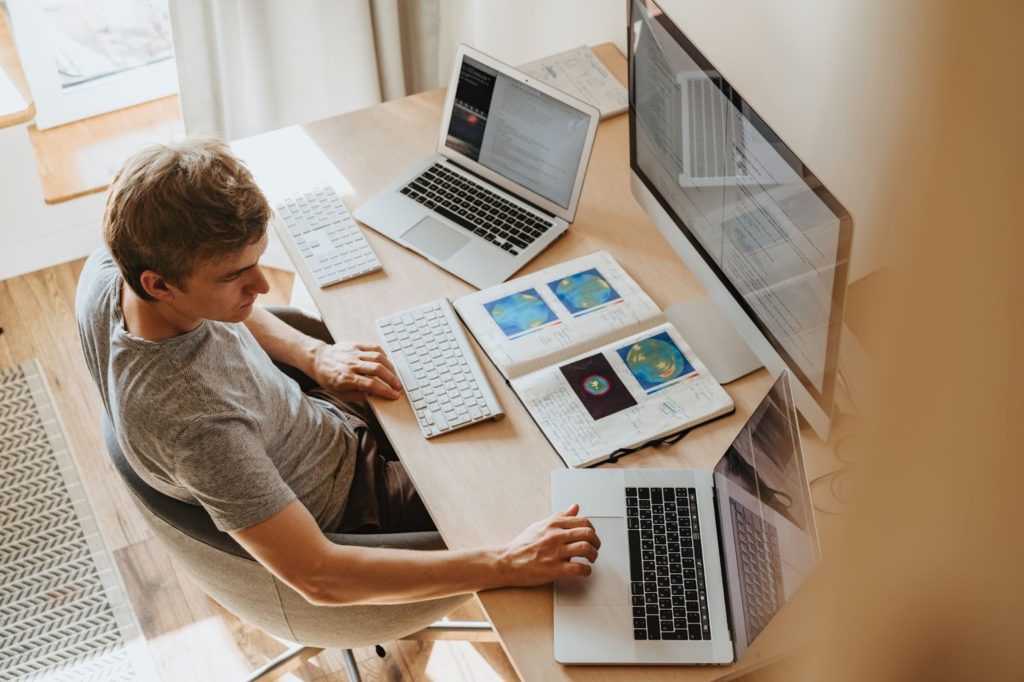 AMZN Announces 2nd Prime Day in 1 Year, The Beginning of the Seasonal Trade? 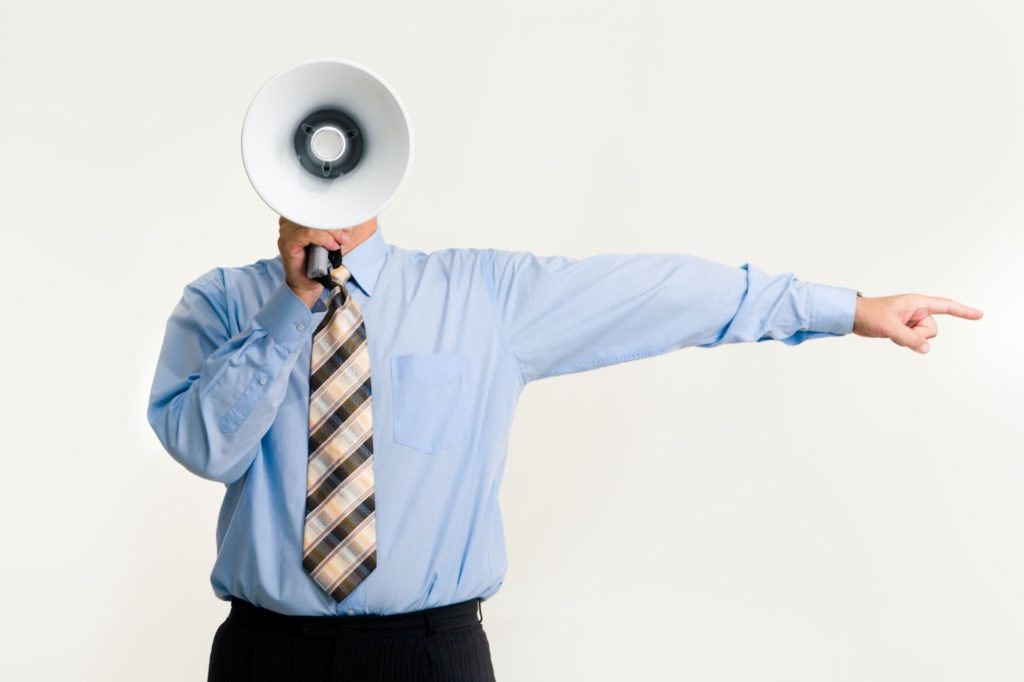