When I went to college back in 1995, cell phones weren’t even a thing yet.

And after graduation, I was hired to teach physical education and be the varsity head basketball and cross country coach, which I did for about a decade. 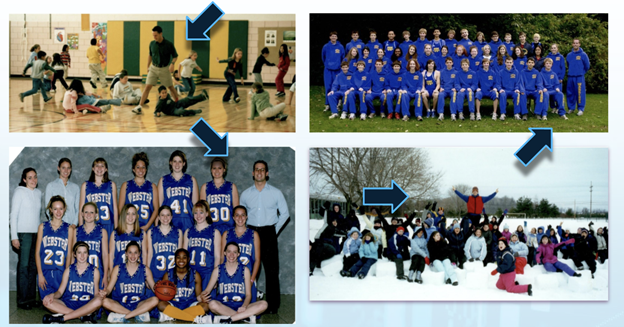 As a PE teacher and coach, technology, like multi-monitor setups, just wasn’t something I knew anything about.

So when I left public schools to trade and teach trading instead, I spent a lot of time researching my first multi-monitor PC setup seen below. 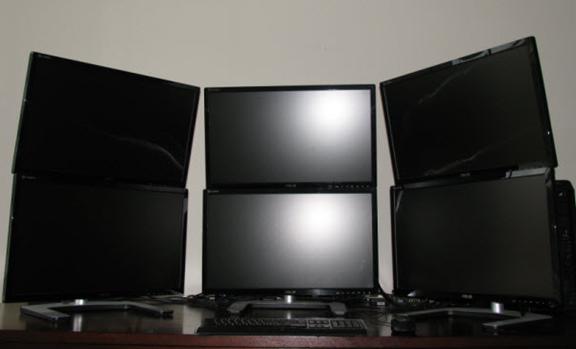 Frustrated with constantly having to update Windows, (which is now much easier) I decided to try an iMac out instead, seen on the left, with the PC to the right, all laid out on a long card table from Costco. Apple and PC monitors didn’t stack well and let’s be honest, between the stands, cables, and dusting, multi-monitor setups are a pain in the ass. 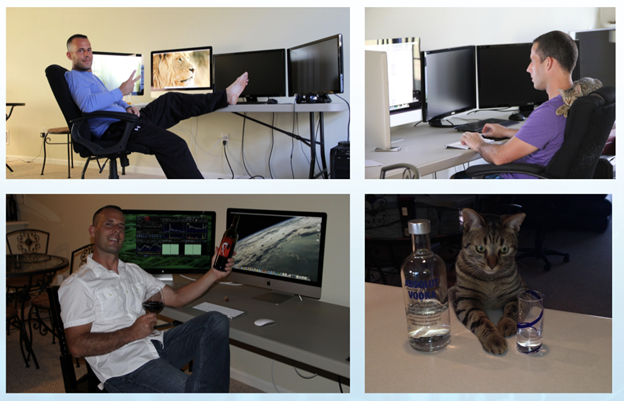 Hard to believe but it’s already been a decade and I’ve tried quite a few multi-monitor setups in that time while teaching quite a few traders about my experiences.

This brings us to 2021 and if I could short multi-monitor setups, I would because I’m predicting they are a thing of the past.

Recently, I wrote about why I’m using this TV instead and how much I’ve enjoyed it.

And I promised to go over the PC needed to make it smooth, so let’s dig in. Hint, it’s simpler than you’d think.

Here’s the setup we discussed in the article above. The reason why that 77” TV works is because it was designed for gamers and as such has NVIDIA G-SYNC and AMD FreeSync built into it. 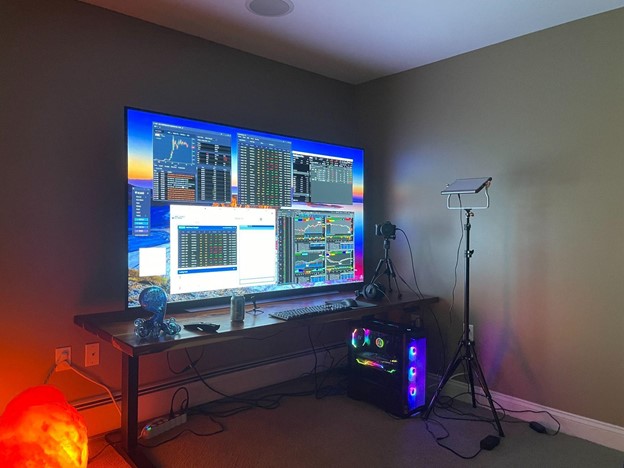 But when I first bought the TV from LG (detailed in the article above) I figured I’d save some money and just hook it up to my iMac. After all, my iMac was expensive, like $14,000 and change expensive, and the TV wasn’t cheap at $2,999 or so, so why not hook them up?

Simple answer, my iMac isn’t NVIDIA G-SYNC and AMD FreeSync compatible, so the TV wouldn’t run multiple windows with appropriate scaling as you see in this photo above.

I called Apple support to try and find a solution but there wasn’t one. So I had this big ass TV on my desk and no way to use it. This is when I drove to Boston’s MicroCenter and talked to the tech team, who explained I needed a gaming computer.

That’s the simple answer, gaming computers have graphics cards with NVIDIA G-SYNC and AMD FreeSynce that can run a gaming TV, so long as the TV has G-SYNC and FreeSync too – something that didn’t really exist until 2021.

I grabbed a custom build from MicroCenter because it had the best graphics card, again, designed for gamers but perfect for traders. My PC has the SUPRIM card in it, which is high end and trust me, not necessary, pretty much any gaming PC will work if you’re on a budget. My personality is all in or all out, so I tend to overdo stuff like this.

Dell’s Alienware Aurora R12 gaming desktop is a popular choice and is very reasonable. In fact, I tried to go with the R12 but couldn’t get one quickly enough, hence I went to MicroCenter in Boston and bought a custom build from their floor instead.

As far as my desk, it’s from UPLIFT DESK and is a custom solid wood built with Walnut 80” x 30” and as you can see above, holds that 77” LG just fine. Card tables work just fine in my opinion for anyone just starting out, as you see above that’s exactly what I did 10-years ago.

My primary concern was that I’d need to sit back far, from the TV, to use it effectively, but what I’ve since found is that’s not true, I’m sitting and typing right now as you would at any desk with a computer monitor. There’s a massive amount of space on this TV, way more than I’d have with six 27” monitors as you see above. Remember, my 77” LG C1 is a gaming tv, that’s why it works, I’ve not seen any others on the market that have NVIDIA G-SYNC and AMD FreeSync in them and without that, it will not work effectively.

Gaming is only getting more and more popular which means more and more gaming TVs with G-SYNC and FreeSync are coming to market and I’m telling you, it’s a very refreshing way to setup a trading station and doubles quite nicely for any traders who game too.

So in summary, I think multi-monitor trading setups are a thing of the past now that LG dropped G-SYNC and FreeSync in their C1 line. All you need is a gaming computer like the Aurora R12 and an hour of setup and say goodbye to the obnoxious stands, myriad of cables, and difficulty dusting.

Comments and questions are welcome below.