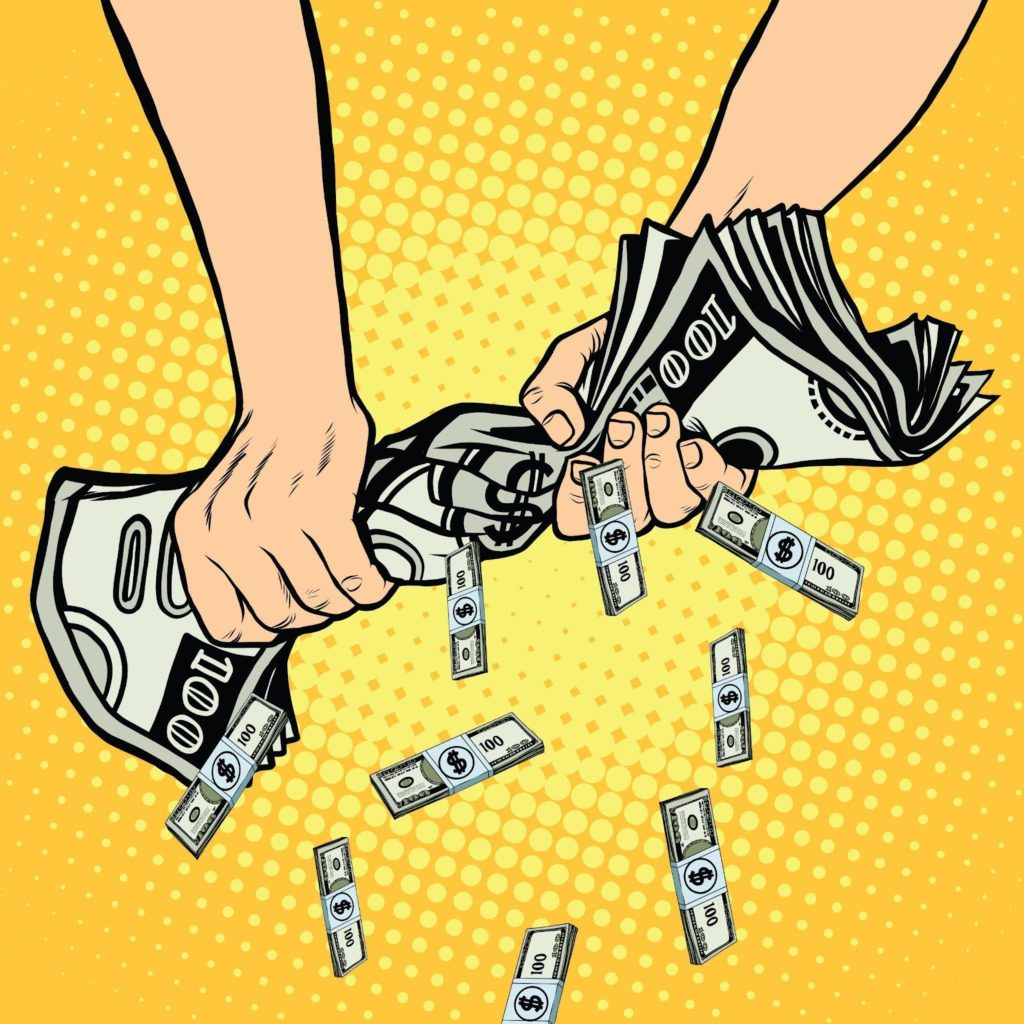 The market continues to march higher and higher, day after day, week after week. Fed asset purchases and fund inflows continue to bid up the market. And with trillions of savings still on the sidelines, there seems to be no end in sight in this roaring bull market.

Until fundamentals change and we see hyperinflation, as the Big Short’s Dr. Michael Burry has already warned about, and/or interest rates rise, there is no reason for the market not to continue higher. 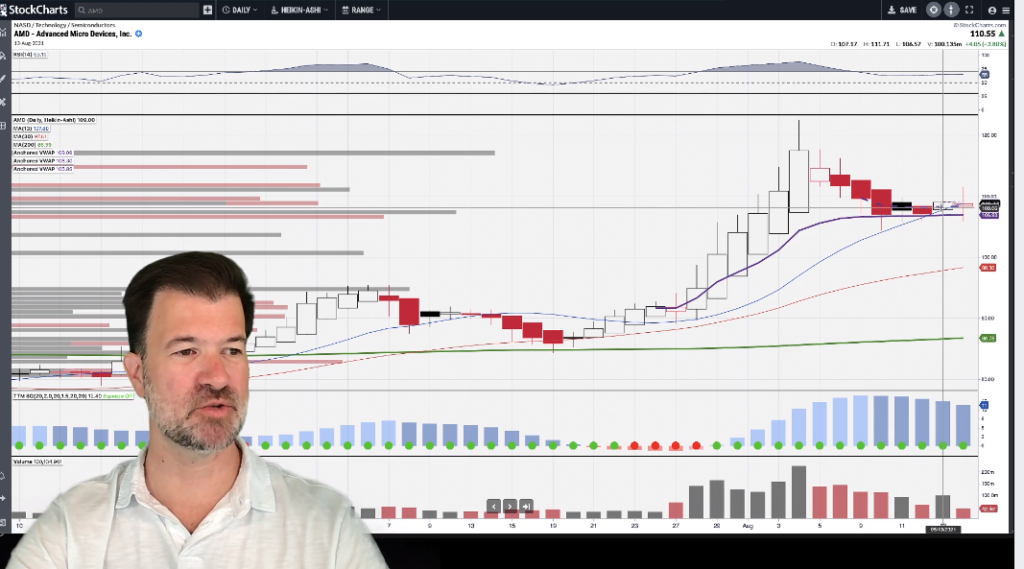 However, in every bull market, there are healthy corrections. Over the past few years, a great leading indicator of an upcoming pullback has been the Gamma Squeeze. Legendary investor Warren Buffett once wrote, “A bull market is like sex. It feels best just before it ends.” And this is exactly what we’ve seen.

Preceding the biggest corrections in recent times, we’ve seen major euphoria and Gamma squeezes in stocks that have gone way further than most people thought possible. The top in these runaway stocks usually marked the short-term top in the market as a whole, where a significant correction followed.

Conditions for a Gamma Squeeze

For a squeeze to occur, sure market participants must be stuck, in this case, stubborn shorts. A squeezing stock can continue to do so until stubborn shorts can no longer take the pain and forced out of their position.

Short interest of over 10% gets my interest, but anything close to 30% or above can fuel a significant move.

A Gamma squeeze is also fueled by options activity— this is what gives the short squeeze added “juice”.

It works like this: People who are short the stock hedge their positions by buying out of the money call options sold to them by market makers. Usually, the smart money has every incentive to have the options they sold expire worthless to pocket the premium.

For the most part, they can do this. After all, if they are the house and well, the house should win most of the time. The fun starts when the smart money gets trapped, and a vicious cycle ensues.

As the Gamma squeeze begins and a stock continues higher, bears pound the stock short because they see the move as irrational expecting it to go down. In order to control their risk, they buy out of the money calls to hedge their short position.

So as new shorts enter selling the stock short, there is also added out-of-the-money call buying when the stock goes higher against them.

This is where things can get out of hand. Once the market makers who have sold calls at levels of high open interest can no longer hold the price below that level to collect their premium, they must hedge their short call sales by buying back the stock.

So, for example, if there is 30k of open interest at $300 calls, once the price holds above that level, market makers are buying stock to hedge those calls sold, providing extra demand to take the stock even higher.

But then new shorts come in and buy the $400 calls to hedge. Once the price gets above $400, market makers are forced to buy stock to hedge the calls that they sold, sending it even higher.

To add fuel to the fire, you have speculators who understand this rare situation and buy out-of-the-money calls and shares with size.

You also have retail apes piling into YOLO (You only live once) calls. This puts even more pressure on shorts and market makers— with substantial open interest in calls that cannot be contained for the time being.

This vicious cycle can continue longer than most participants think and usually goes on until a lot of short-sellers are forced out of their positions, pushing prices even higher as they cover at any cost, or sometimes a hedge fund or big trader blows up. The top is usually marked by a rapid, unsustainable rise in price known as a blow off top. Let’s look at a few examples. 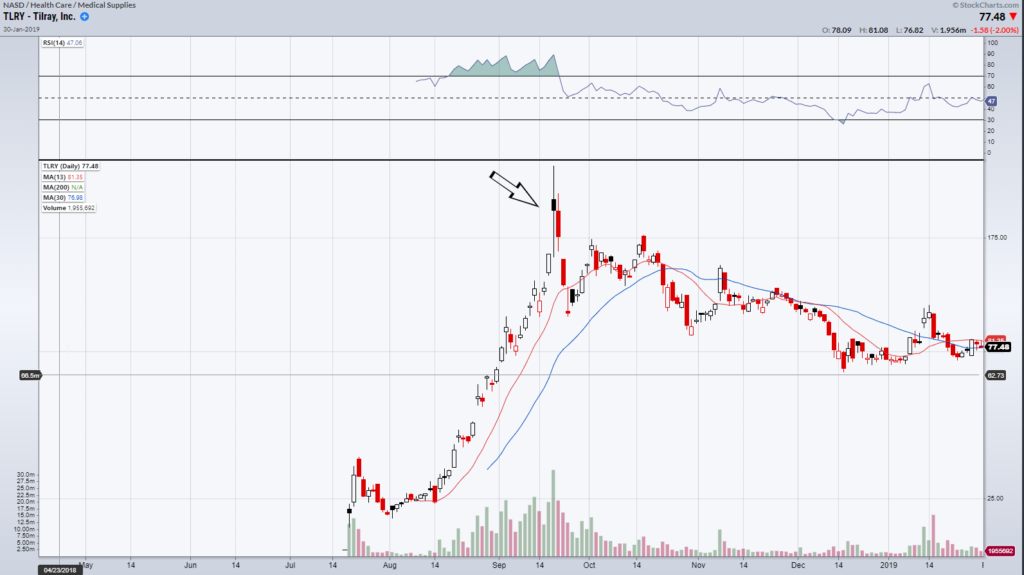 Tilray INC (TLRY) was a low float Marijuana IPO with a short interest of over 30%. In the space of a month, it rose from $30 to $300, leading the charge for the Weed sector coming into Canadian legalization.

The blow-off top occurred on the 19th of September 2018, where the stock opened at $233.58 after closing the previous day 154.98. It began to skip prices and accelerated to hit a high of $300, before having a circuit halt down and closing the gap back to 154.98 before recovering to close at 214.06 that same day. It proceeded to sell off towards $100 over the following weeks and fell below $20 the following year.

The top in TLRY also marked the short-term top in the SPY. 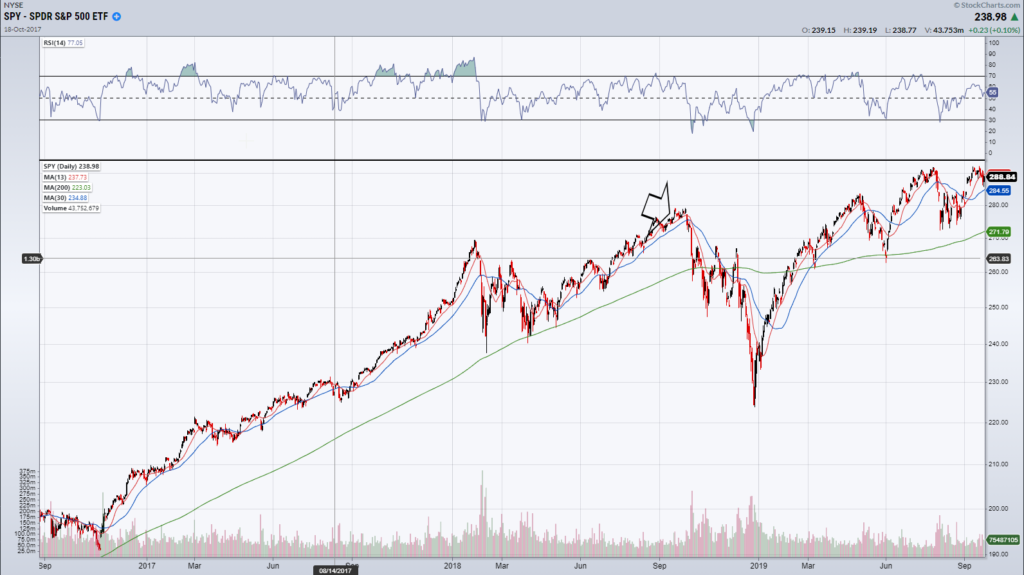 After the 19th of September blow off top in TLRY the SPY consolidated at its high for another couple of weeks. It made a high of 279.03 on the 21st of September, tested it on the 3rd of October, failing at 279.02 and making a double top. The SPY proceeded to sell off 20% over the next three months. Market exuberance in TLRY was a warning for the major selloff to come.

The next stock Gamma Squeeze stock we want to look at is Beyond Meat INC (BYND). This was another low float IPO with eventual short interest of greater than 30%. This was the first company to list in the “plant-based meat” sector. It ran from $46 to $239.71 in the space of 3 months. It made its high on the 26th of July 2019 before a capital raising on earnings day led to a selloff. Over the next few weeks, it fell to $140 before finishing the year at around $75. 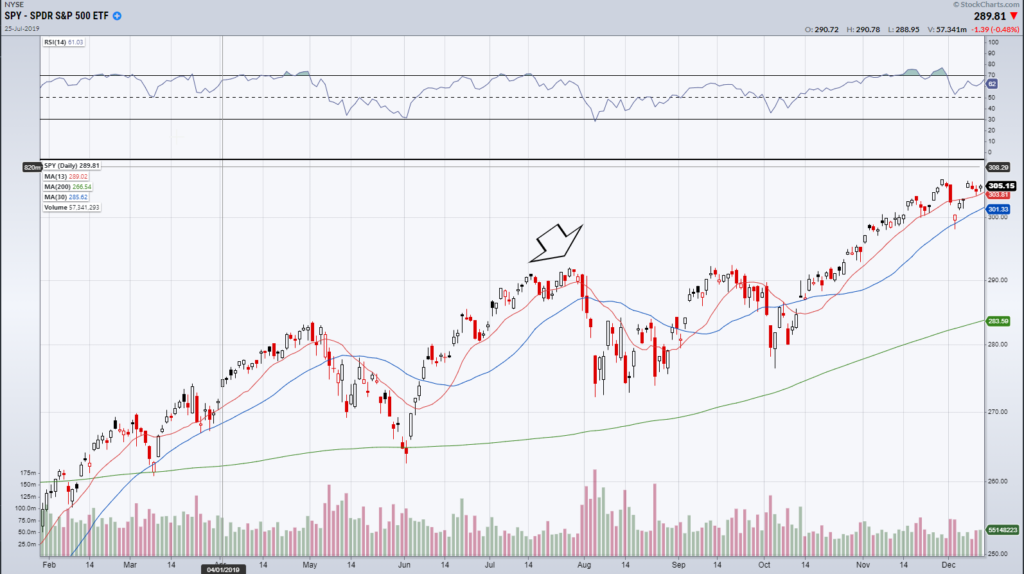 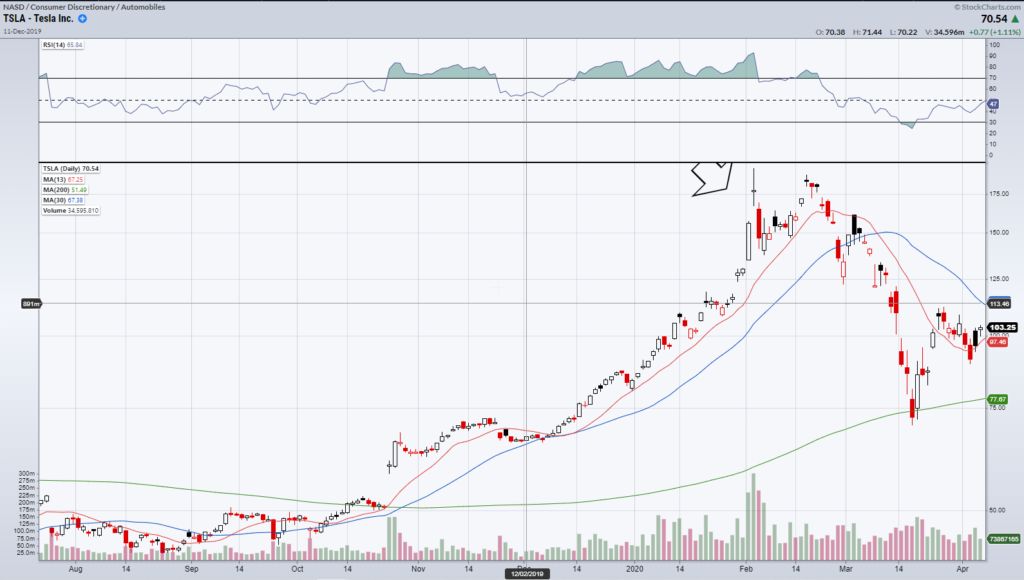 (Daily Chart of TSLA needs to be adjusted for 5:1 split i.e., multiply prices by 5)

The next Gamma Squeeze we will take a look at is Tesla Inc (TSLA). Following the release of the Cybertruck, TSLA had a major squeeze into the new year right into corporate earnings, trading from $350 to $580 coming into the release. Many traders and funds were shorting into this rise. Moreover, around 30% of the float was already short.

After a profitable quarter, TSLA held the gap and consolidated at $650. Even after the SPY was selling off due to the beginning of Covid in China, TSLA remained relatively strong, shorts were trapped, and there was major out-of-the-money call buying.

The blow-off top took two days, with the stock running from $650 to $970 as shorts were forced to liquidate, market makers forced to hedge, and speculators kept buying calls. The blow-off top was on the 4th of February where in the final 15minutes TSLA sold off from $970 to close the day around $900. The following day TSLA sold off to $700.

After a bounce to $900 over the next few weeks, TSLA made a lower high on the 19th of February and then sold off to $350 during the Covid market crash of 2020 into March as its factory was forced to close for a while. 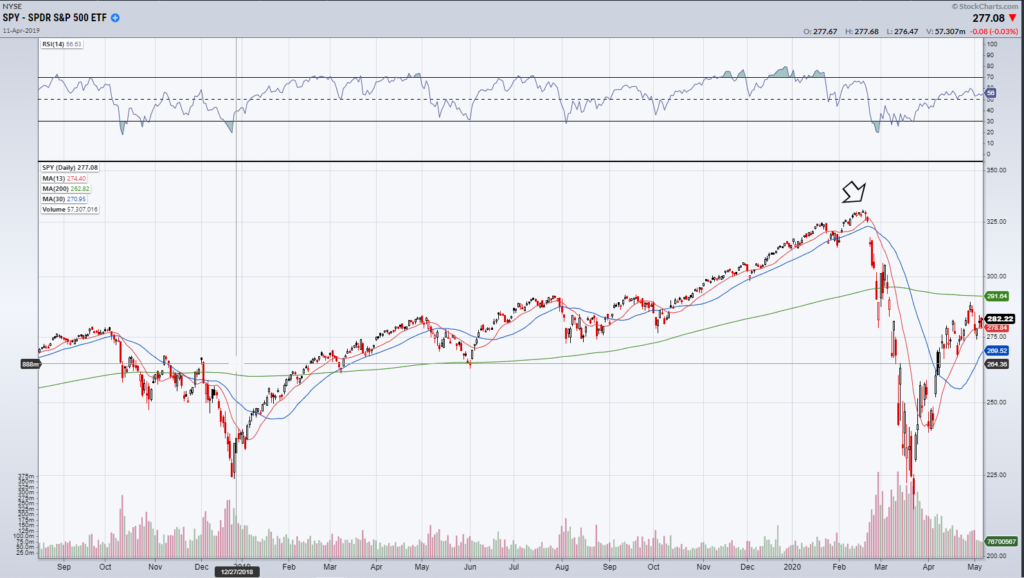 The top in the SPY was made on the 19th of February, two weeks after the blow-off top in TSLA as Covid spread to Europe and the United States. Over the next month, we saw a selloff of 35% in the SPY. 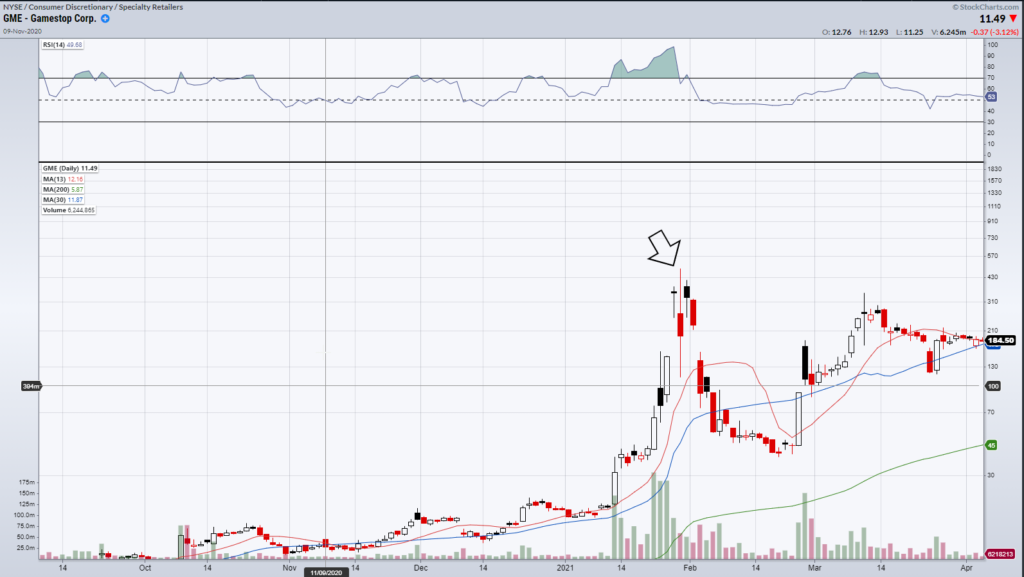 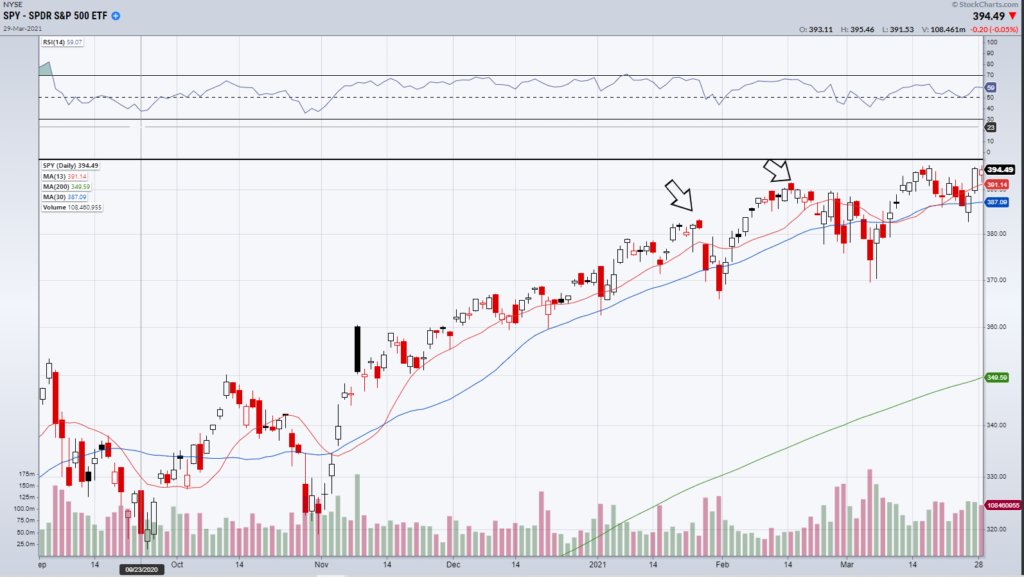 While GME was squeezing the SPY fell 4.6% from the 26th of January to the 29th of January, perhaps due to the fact that some funds short GME had to liquidate their larger blue-chip holdings that they were long. Three weeks after the blow-off top in GME, there was a 5.4% selloff in the SPY from the 16th of February to the 4th of March.

From the examples above it is evident that there is some correlation between major Gamma Squeeze events and subsequent market selloffs.

Gamma Squeeze events typically occur near short-term market tops. They signify excess euphoria in the financial markets as retail investors and funds pile in at frothy levels. When prices move in an unsustainable fashion and then collapse in these larger capitalization names, wiping out billions in days, if not hours, the broader market tends to sell off not long after.

As Warren Buffett aptly wrote, “A bull market is like sex. It feels best just before it ends. Perhaps the next Gamma squeeze will signal the beginning of the next market pullback. For now, we keep grinding higher. 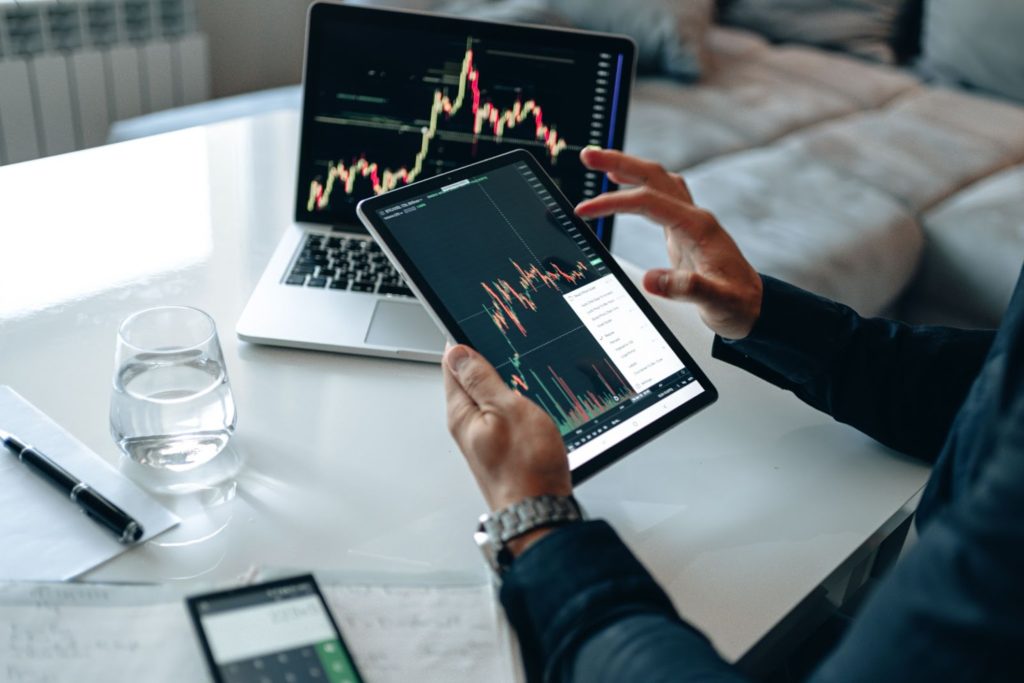 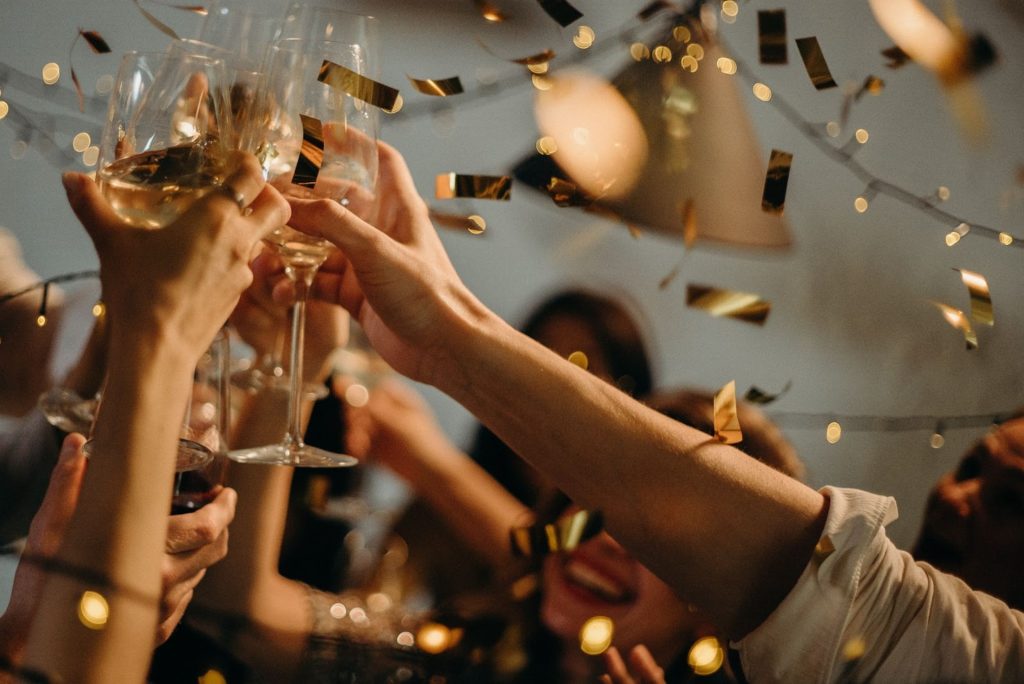 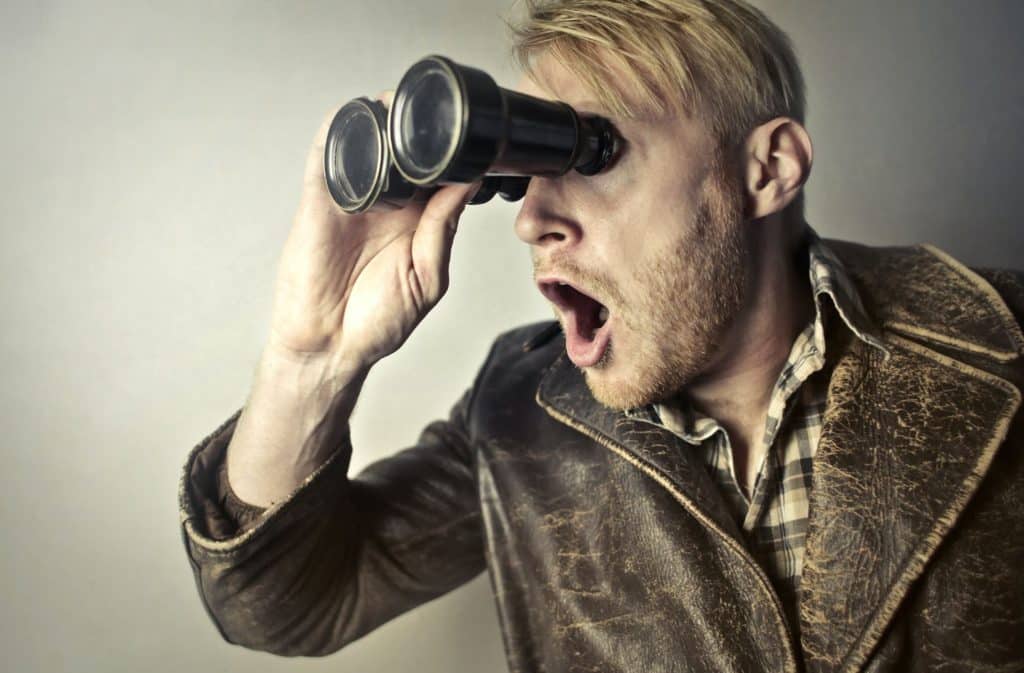 Does the house always win? 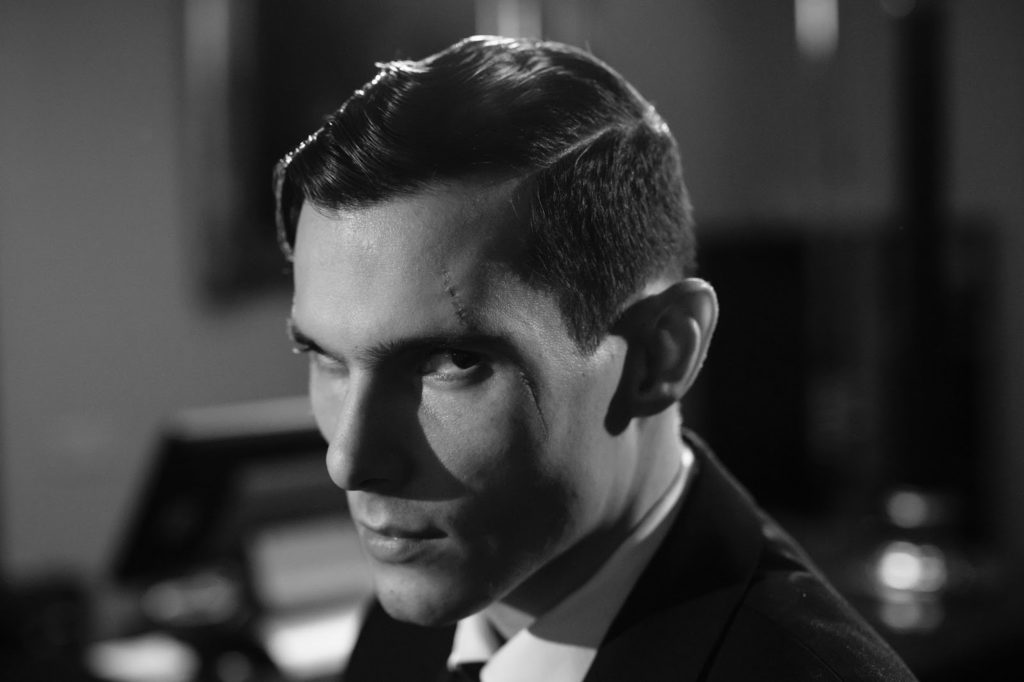